The North v South Fun Day was a drawn series last year which was fitting, since it was the first time we ever held the event. There were lots of warm and fuzzy feelings and pats on the back. The southern boys hid their smiles when the yanks threw the bat during cricket, players filled in for other teams and the referees decisions were accepted with minimum fuss. We all wondered if the inter-hemisphere rivalry would remain so polite.

With British weather settling over Bangkok for several days leading up to the event, some wondered if the second annual North v South Fun Day would even go ahead. Luckily the day dawned fine and as it turned out, the Sun shone brightly over the Southern Hemisphere team, who took the home conditions as an good omen and ended up taking home the trophy in a dominant display.

The first event was a game of full-field mixed touch which was a tight encounter in the first half. Raf, with twice as much room to run sideways as usual, set about his work with gusto, zig zigging in front of his team in search of gaps in the Southern defense. Brad refereed with equal enthusiasm, doing a sterling job before throwing the whistle to Northern team at the half-time break. The North threw it back however, since they had nobody to ref, so Jimmy put his hand up and showed a lot of ticker out there, keeping up with the play and keeping a solid 8m offside line at least half of the time. After being level 2-2 at half time the South pulled away to win it 5-2, despite Saffa James’ legs still being drunk from the night before.

The Men’s touch was a thrilling encounter, with the South letting in two easy first-minute tries before finally sorting themselves out and remembering where to stand on defense. They hit back with tries of their own, and in what must surely symbolize their determination to score, Skinny blew the bottom off his right footy boot. Although quickly replaced with a pair of runners, the loss of traction would prove costly in the second half. Bronson finally blew the whistle after what must have been at least a 17- minute half. Several minutes later the women’s team playing on the opposite field also got the message to break for a drink.

The second half was a try-fest, and as the clock wound down the lead changed several times. A crucial moment came late in the second half as on defense, Skinny’s right gym shoe slipped at the critical moment, allowing Brendan to run around him and score, making him look much slower than is actually the case. The match ended in a draw (7-7).

The Woman’s match was also a tight encounter with the South taking the honours 7-6.

The netball girls, supplemented by 4 blokes in need of some aircon, then headed indoors for a bit of mixed netball. The first half was very close, and the shooting in particular was of an extremely high standard. At half-time the South held a slender 5-goal lead. The high standard of netball remained in the second half with very few scoring opportunities being missed. Fortunately for the South those opportunities came more regularly and they began to pull away, eventually winning comfortably, 35-21. 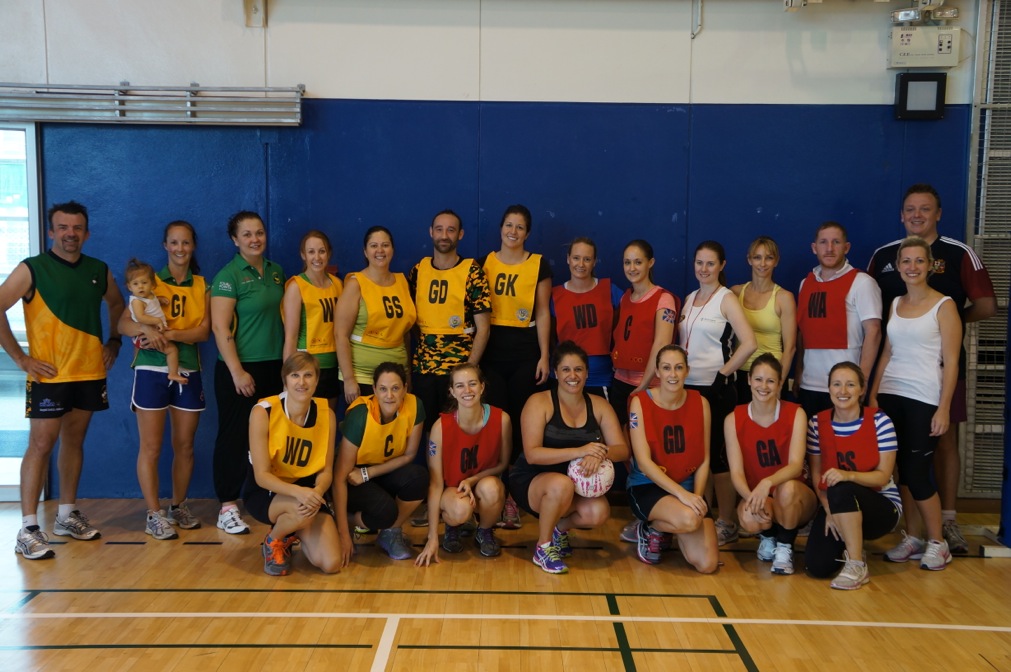 Outside in the Sun, the Southern team was showing utter dominance in the cricket. Smashing an impressive 92 runs off 12 overs, the North never even got a sniff. Marco was even holding the bat the wrong way round as they limped to a paltry 24 runs, despite poaching Vaughany to swing the bat for them in the hope of cracking 50. 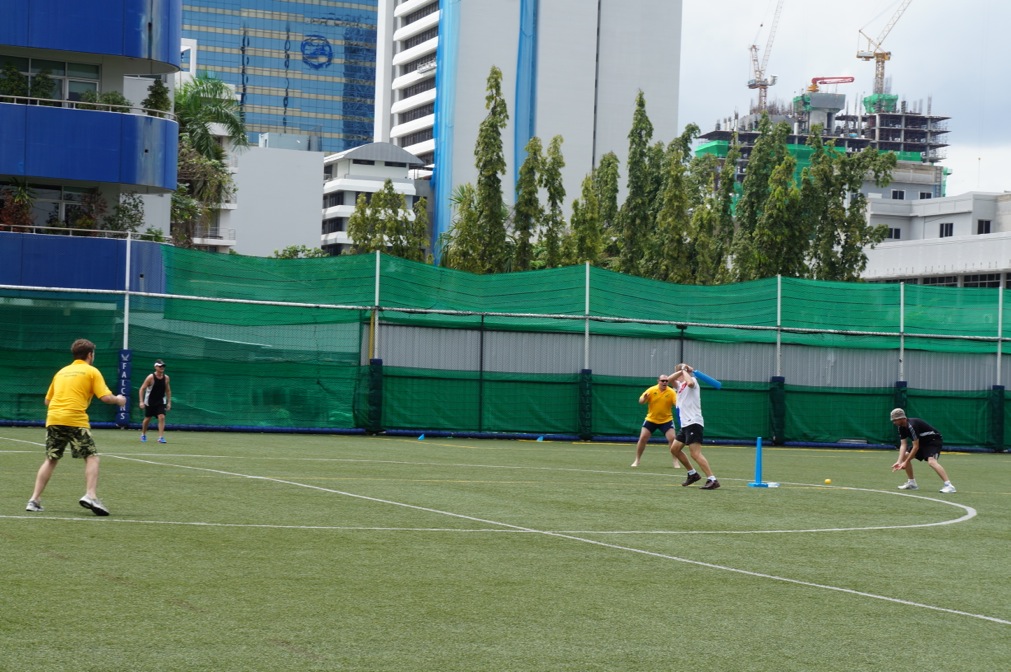 That ended the sport for the day, with the South finishing with a clear overall victory by 4 matches to 0.

It then completely pissed down for about 20 minutes, but that didn’t matter since Dana had wisely relocated the after-match function from the rooftop (Ambar) to the indoor restaurant/bar (Wrapped) at Four Points by Sheraton on Sukhumvit Soi 15. Four Points again proved to be fantastic and generous hosts. The beer and wine flowed freely and the buffet lunch was fantastic.

Many thanks to everyone who came along to both the Fun Day and the after-match function at Four Points, and special thanks to Dana who organized the event and Suzanne who kept everyone informed on Facebook. Thanks also to the members who refereed or umpired on the day.