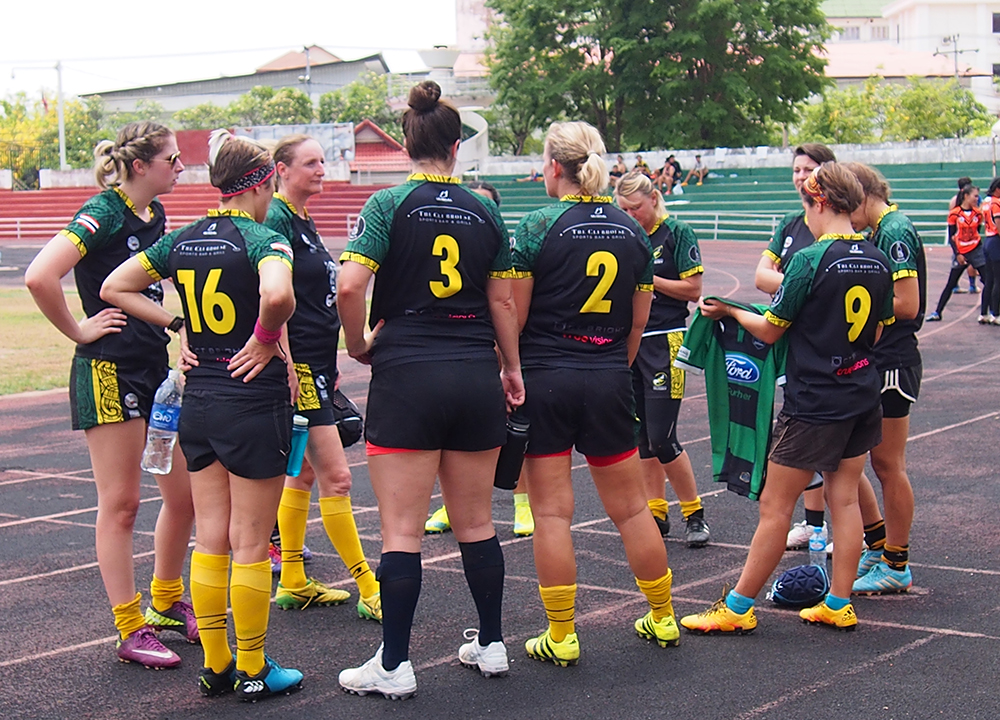 This year has been a year of many firsts for the Southerners Women’s Rugby team; first tournament, first try, first win and just recently their very first international tour (and first time playing sevens rugby). The destination was our Marxist-Leninist neighbours Laos, with the Southerners participating in the Indochina Cup women’s competition held in Vientiane. It was a lazy Friday afternoon arrival into the capital (for some) and a later one for others, but everyone made it safely to the team hotel.

Our first match was against the local expat side, the Vientiane Buffalettes who had the home support on their side. The Buffalettes were up for the game and set the tone early scoring the opening try, but the Southerners hit back through Nathalie who was sent through by Linda. The first half wound down and despite some strong runs from Kait, the half ended all square at 5 points a piece. In the second half the Southerners were pinned back by two quick tries from the Buffalettes, but we kept fighting until the end. We finished strong with Moi scoring between the posts, final score 10 – 15. Our second game was against Phimai, who were small, but very fast and well drilled. The Southerners were held scoreless, with speed being the deciding factor in the game as is often the case in sevens rugby. 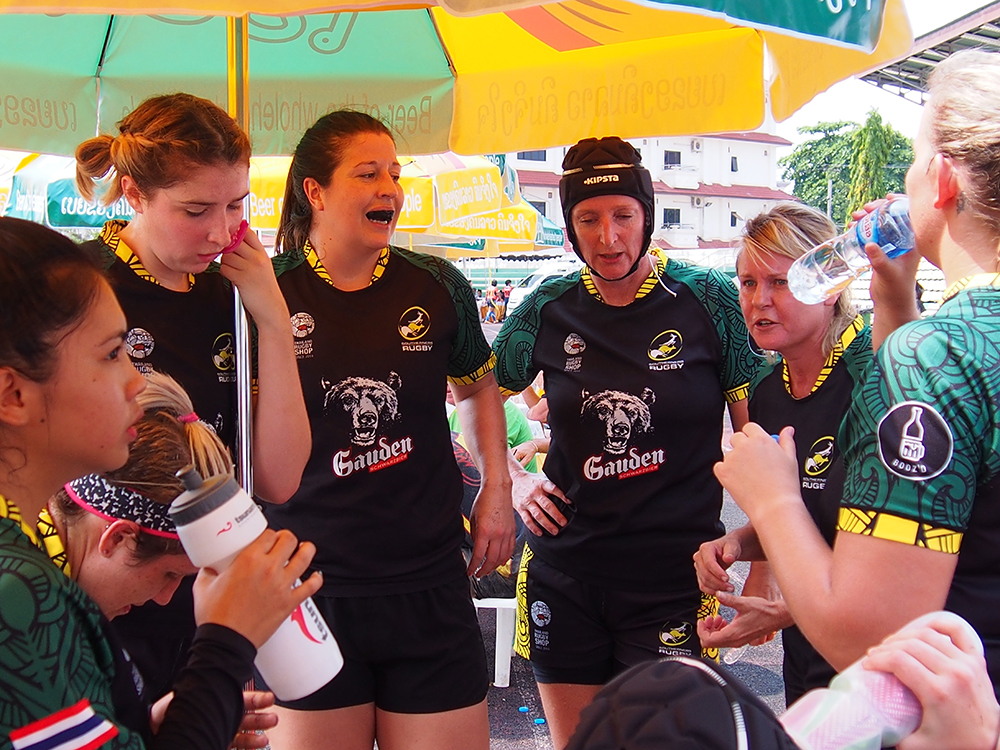 The third match was against the Vientiane Lions team who were champions of the Bangkok tens tournament and were a very strong club team with some Laos national team players. Again they were small, quick and very well drilled, this seems to be a recurring theme in South East Asian rugby women’s teams.

We knew that we would never outrun them, so we used our size and strength to our advantage and introduced the rolling maul. It was a good tactic for us and worked well, but would have worked even better if we had practiced it for more than 3 seconds before we went on the pitch. The match ended as a loss, but there were positives to take from the game.

We were due to play another match for 3/4th place against the Vientiane Buffalettes again but a case of misunderstanding/miscommunication meant that both teams had already called it a day and started enjoying some cold beverages. So it was decided that we would settle the dispute as only expat teams could, a boat race. 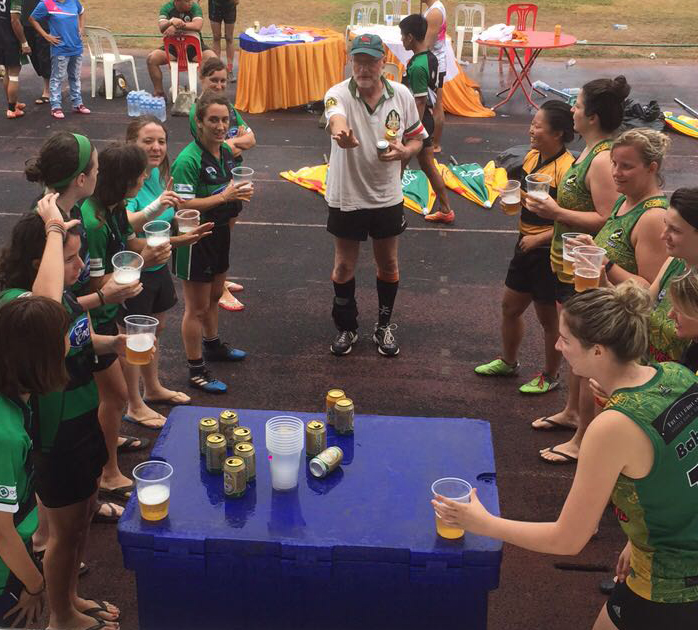 They may have beaten us earlier in the day but a competitive boat race between two teams was enjoyed in good spirits. We were very confident and rightly so, blowing the Buffalettes off the park! 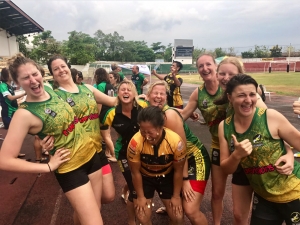 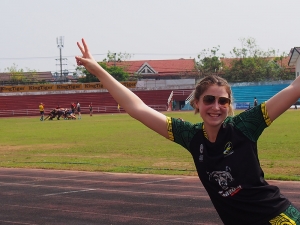 Congratulations to the Bitch of the Pitch – Moi, Nathalie for scoring her first try and everyone involved as we finished 3rd overall! Special thanks to Lol for being tour admin, Ian Hughes for taking photos, our coach for abandoning the team to fend for ourselves on our first international tour, random players who played for us and the Vientiane Buffalettes/Buffaloes for inviting us to the tournament. See you next year! 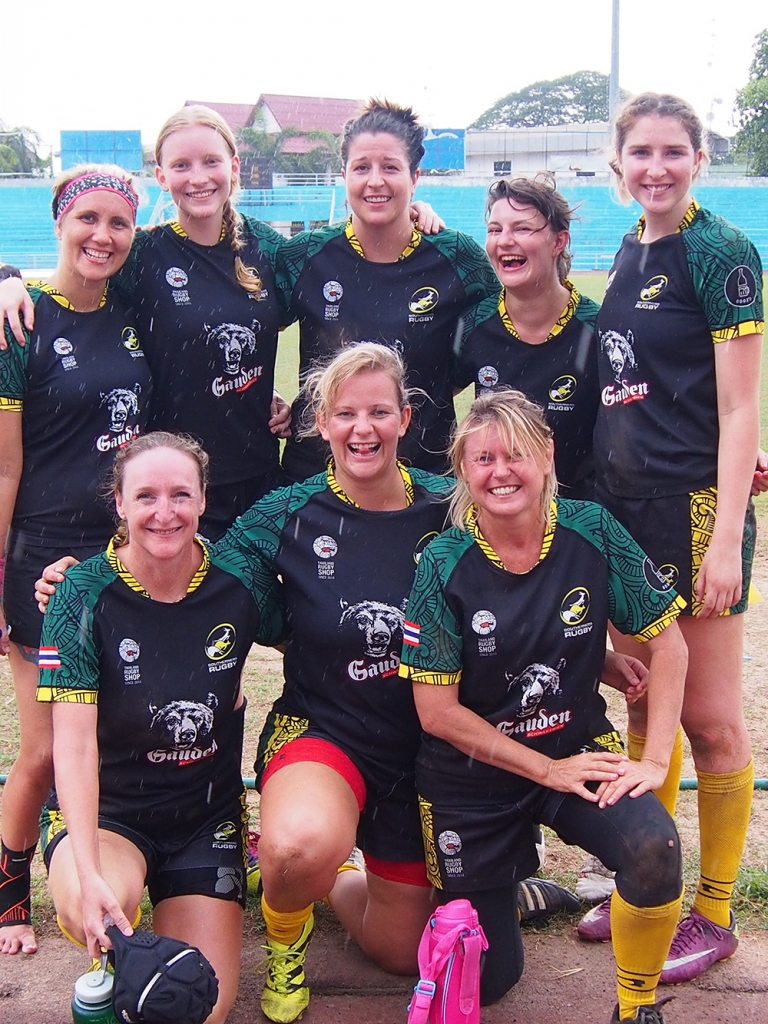