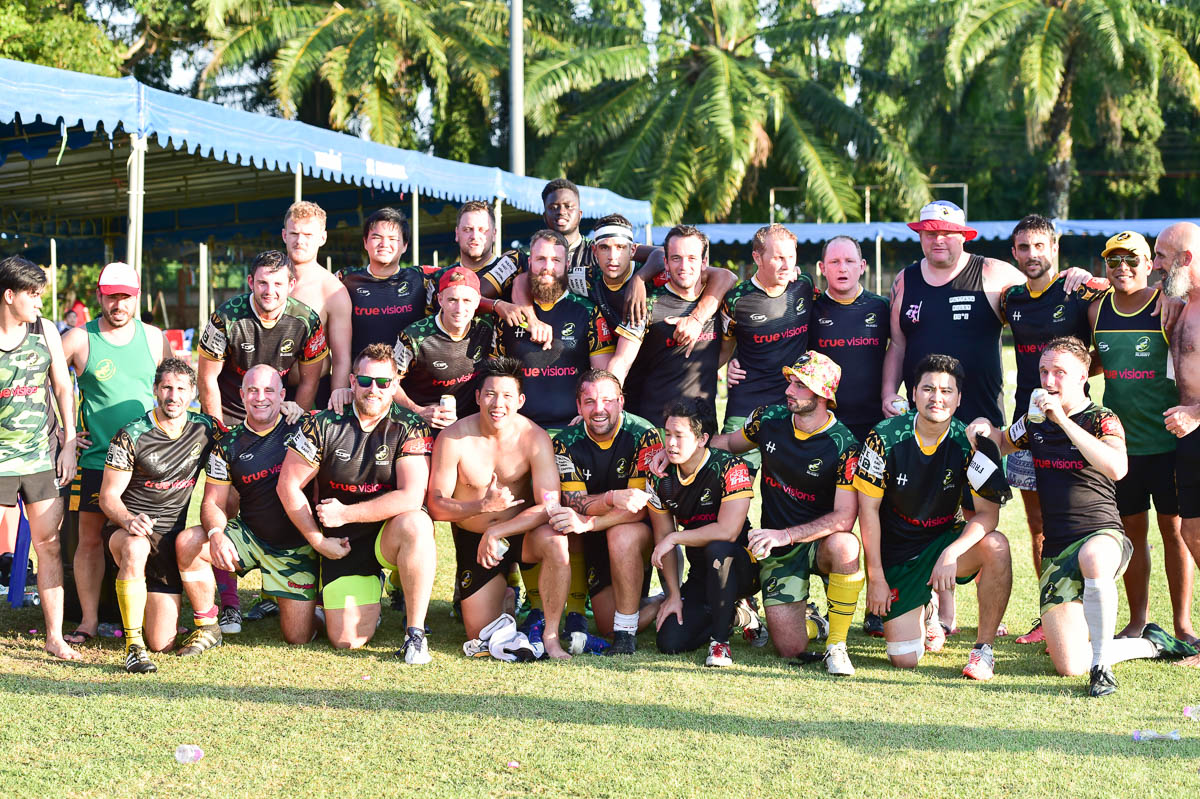 April in Thailand always means two things: The beginning of the hot season and the arrival of the Chris Kays Memorial Rugby Tens Tournament. The Pattaya tournament has always been a highlight for the Southerners who enter two teams, the Southerners Black and Gold, with the Gold team being a development side.

And so it began, with a very early 6:00 AM start on the Saturday morning, to the groans of certain team members mumbling about “too early” & “could’ve had an extra half hour sleep”. In a new record for the club, almost everyone turned up on time except for a certain Dr. Anthony, who despite having a PhD could not follow basic directions, and managed to get lost on a one-way street. It was not until a little while in that the team realized there were no adults to supervise this tour as Zorba & Darrel were not on the bus, leaving us with El & Matt in charge. 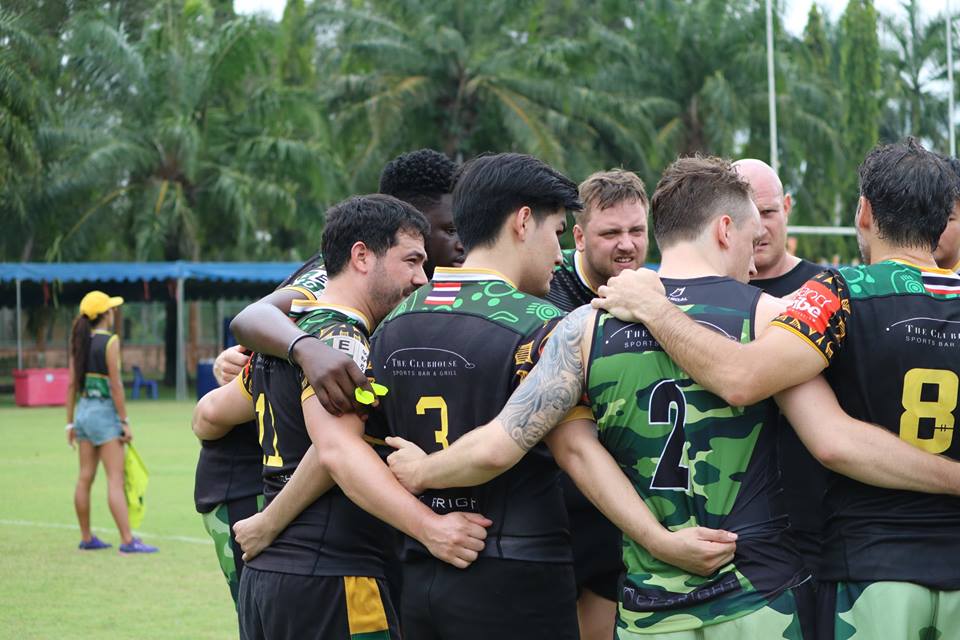 Soon we were approaching the pitch, having made the journey in quick time. First up were the group stage games with each team to play three games that day. Southerners Black finished the day top of their group with 3 solid three wins and no points conceded. They started strong with a 22 – 0 win out of the gate against O.V. with the backs playing some slick rugby. The next game ended 40 – 0 against Arch Thai a team of relatively young university architecture students. The afternoon ended with the Southerners Black comfortably beating the Hong Kong Valley Griffins who couldn’t wait for the post game to crack open the tinnies. 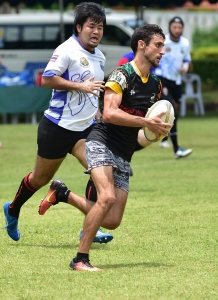 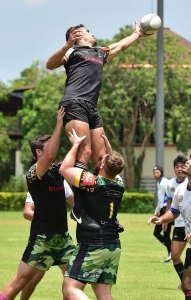 The Southerners Gold started their day against good friends the Bangkok Japanese. The match was evenly contested and was hanging in the balance at one try a-piece. With the clock winding down, scrumhalf substitute El went blind from a scrum in our own 22, after breaking the line, a lengthy kick was put through for fellow back Matty P who dotted the winner under the posts 12 – 5. Next up was Elephant Brutal, a well-drilled team from Surin who were too good for the Southerners Gold who went down 5 – 19. Special mention goes to Kevin for getting his first yellow card, as he didn’t know that you couldn’t decapitate people in rugby. The last game against the never sober touring side La Vache Rouge ‘Red Cows’ from the UK went as expected, with the Gold team coming out on top. 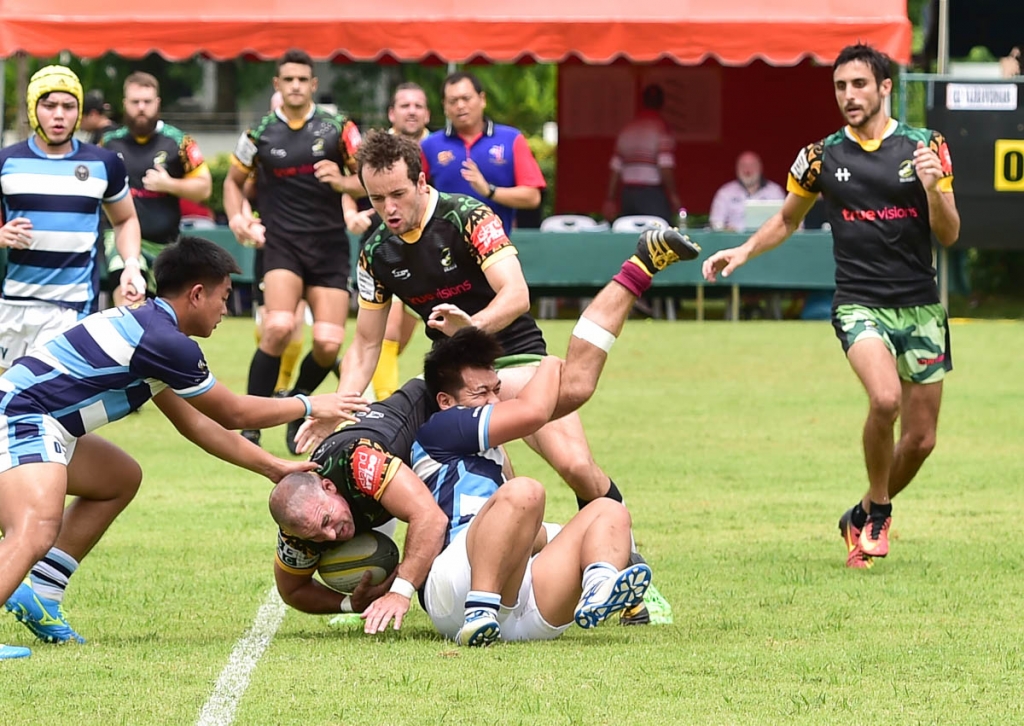 All in all 3 wins for the Black’s and 2 wins for the Gold’s ensured both were through to the cup draw the next day. The team checked in and went for a relaxing swim in the hotel pool to enjoy a few refreshing beverages. As a club, we always talk about good club spirit and frown upon poor discipline, whether it’s arguing with the referee or making it harder for your teammates by getting a card. As such, Kevin (yellow card) and through no fault of his own other than being his roommate Adam were designated Beverage Servers for the night, an appropriate farewell for their last tour ending with a motorbike ride off into the sunset. The following morning, both teams made it to breakfast where they re-enacted a scene out of the Walking Dead. Everyone made it to the bus on time except Ronan who decided to get up early and have Indonesian food for breakfast for some reason. But we made it to the pitch with time to spare. 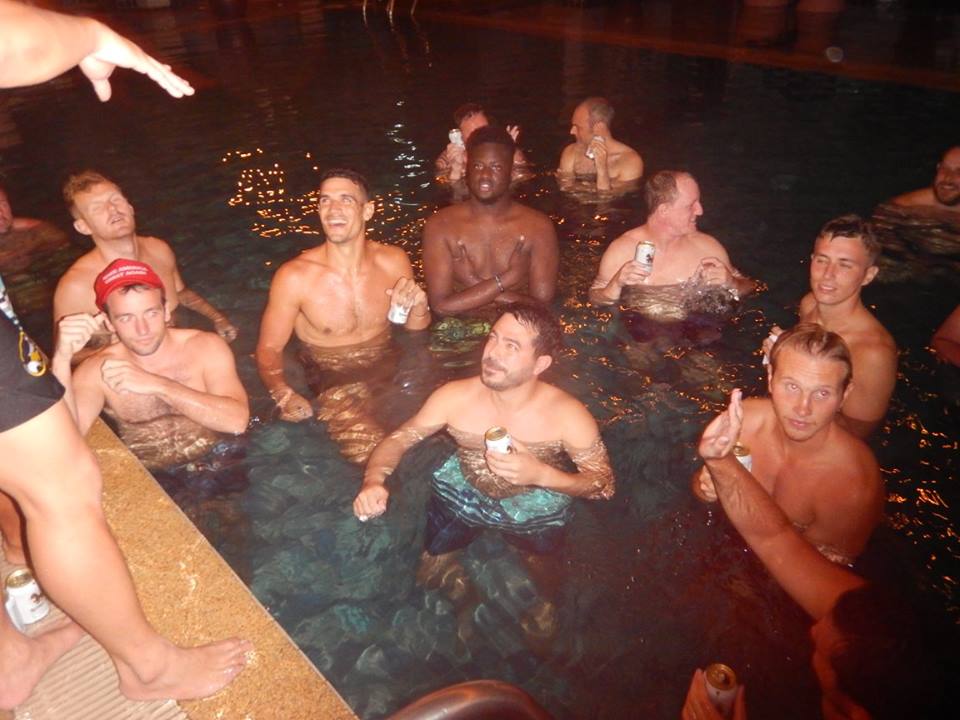 Both teams were still in the cup, and had tough games in front of them to progress. The Blacks had the our fiercest rivals, the Bangkok Bangers. Who played out a tough, gritty game contested by both sides, with the Blacks being sucked in by the Bangers arm wrestle game plan. The game ended 5 – 5 but by virtue of scoring the first try the Bangers went through, a disappointing result but the Black team were still in the running for the plate trophy. The Gold team faced off against the Sam Yan Rangers, another organized and fit Thai team. They were holding their own, but having two players yellow carded (Kevin AGAIN) did the damage, and the rangers took advantage of the numerical advantage to score two quick tries, putting the Gold team into the plate competition. 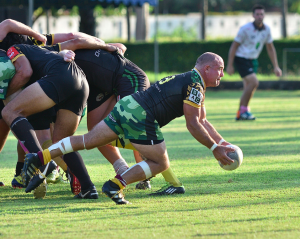 Southerners Black were drawn against an Australian touring team called the Vikings, but would not play until later that afternoon, giving them a long break during the day. The Gold team were up against tournament hosts the Pattaya Panthers, who by virtue of having a few extra players at their disposal, and running a tight game, managed to overpower Southerners Gold. This meant that they now had to play again, this time against another Thai team, Bangkok University. Playing three games was bad enough, but playing at midday, in the heat against a well-drilled Thai team who had not gone out the previous night was too much for Southerners Gold who dropped to the final tier. 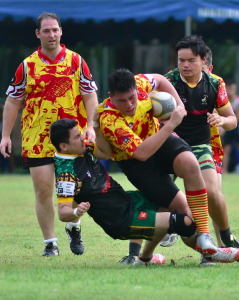 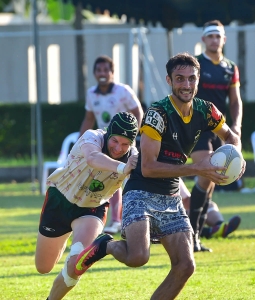 Through luck and gross alcoholism, two touring teams did not turn up, placing the Gold team into the final for the shield. But before that, Southerners Black had to dispatch the Vikings in their plate quarter-final, which they did so with ease, scrum-half Dougie managed to snipe some quick tries, before sniping an opposing player in the back and being promptly yellow carded. This brought the weekend’s total card count to four by the Southerners, therefore maintaining our excellent reputation. Even with a man down, Southerners Black held their nerve and progressed to the plate semi-final against the Bangkok Japanese. This was a hugely different side to the team that Southerners Gold played in the group phase on the Saturday, with a full strength squad that put up a good fight but Southerners Black came out winners in the end. 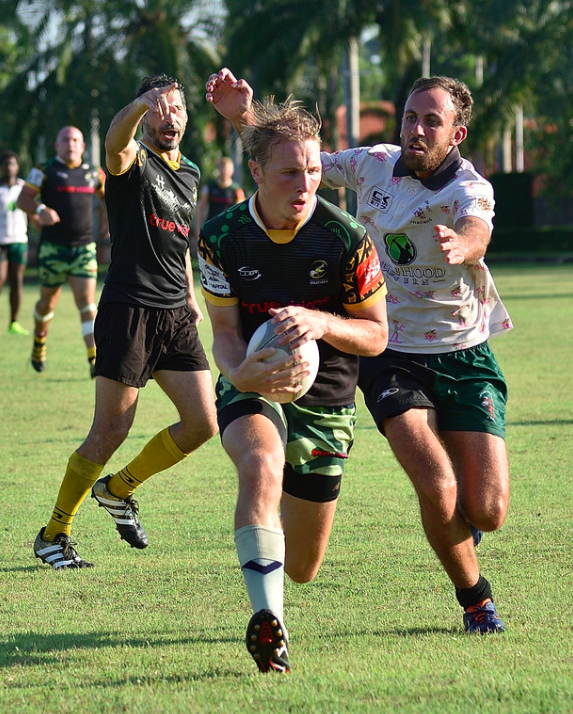 Both teams now prepared for their respective finals. The Gold team had clearly annoyed the rugby gods, as they were up against yet another young, fit Thai team in the afternoon heat; I-Animals. The Animals were as expected, quick and dangerous, but with some controlled rugby from our big forwards Matt, Maek, and Rob, the team started to score tries. The Animals continued to fight, also scoring some excellent tries, but by sticking to our game plan and with a nice bit of individual skill a piece from both Luc and Matt P, Southerners Gold got the victory and the shield trophy. 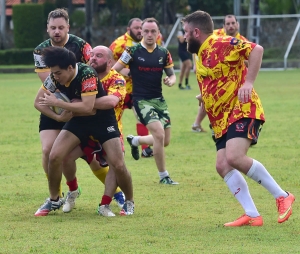 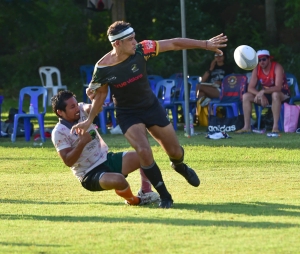 Southerners Black faced off against the hosts, the Panthers, who had beaten the Gold team earlier in the day. However, fired up by the final, the Blacks quickly took control of the game, with Thibault and Ross scoring a brace of tries in what was a solid first half. The second half was more of the same, though with players starting to tire in the heat. Southerners Black continued to exert pressure, resulting in tries from captain Knotie and the only French person we actually like, Luc. The game finished with Southerners Black winners of the plate trophy. 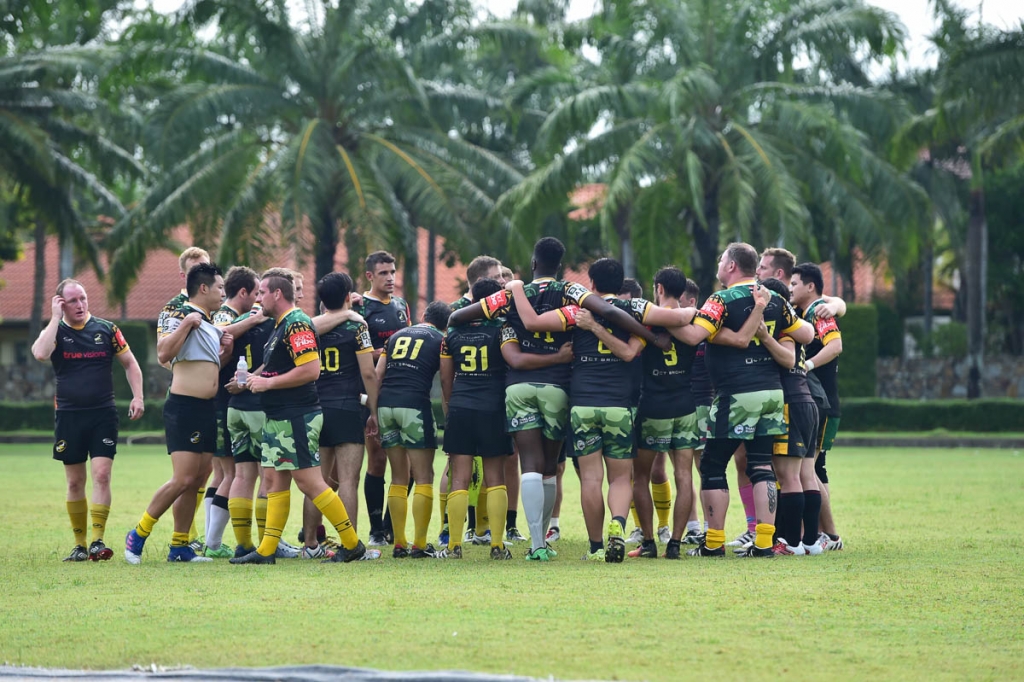 It was off to the pool for the trophy presentation after a long day of rugby with both Southerners Black and Gold eager to collect their winnings. A few celebratory drinks later, and the long journey to Bangkok began. Broken bodies were everywhere, but another great weekend of rugby was had and both teams came back with silverware. Well done to all involved! 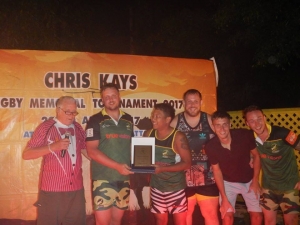 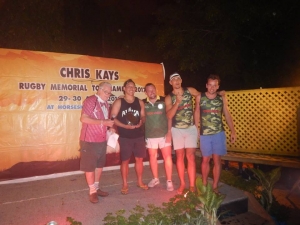 Special mention goes to Adam and Kevin (below) for playing in their last tournament for the Southerners, we wish them luck in the future. Also well done to Adama for playing in his first ever rugby tournament and Maek for scoring his first try for the club. 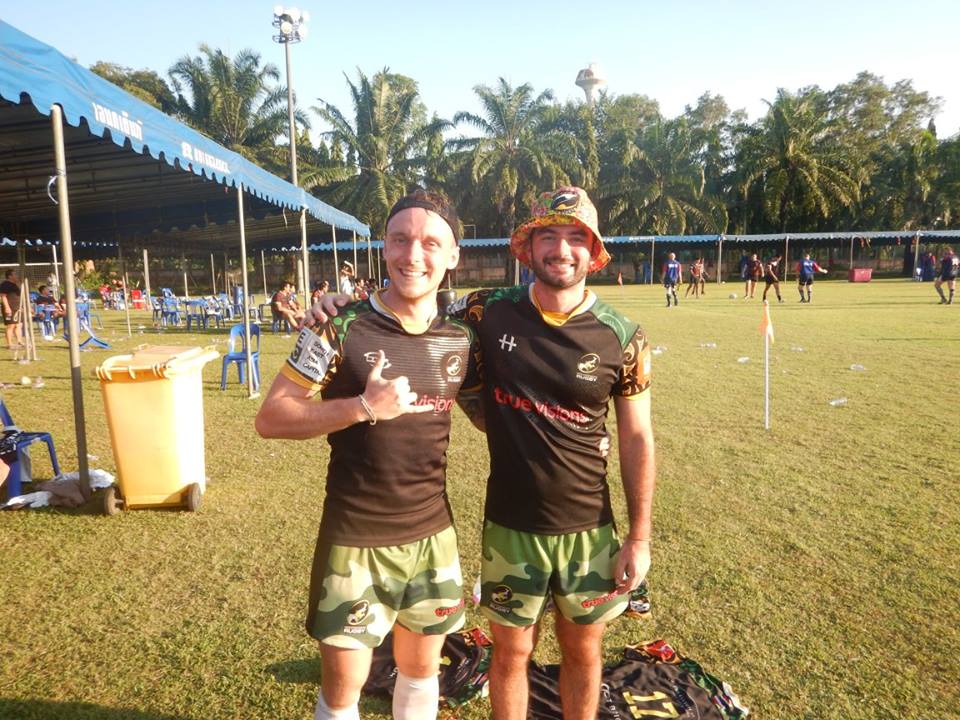