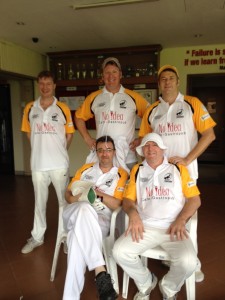 Last June, our Southerners Cricket boys, led by skipper Vaughanny made it down to the Ceylon Sports Club  for the annual Denis Meyer Veterans’ 6s tournament.  The tour report below provides all the gory details of this enjoyable experience.

After seeing the tour party numbers vary between 3 and 9 over the weeks leading up to the tournament, the Southerners put together a strong looking team of 6, with Vaughanny (skipper), Noel, Mossy, Nick Vegas, and Neil, being joined by ex-Southerners “Legend” Speddo, travelling up from Perth for the weekend.


First item on the agenda was the Friday evening Captain’s meeting and welcome cocktails at the Traders Hotel, an opportunity to meet old friends and adversaries and to oil the vocal chords for the days ahead… Here we got our first piece of bad news, the Spirits (the tournament organizers) seemingly abandoning their practice of previous years in giving overseas teams the comfort of a late start on the first day, and putting us down to play the Misfits Gentlemen (one of the seeded teams), at 8:45 a.m. …

From the Traders we moved on to Harry’s Bar in Orchard Towers, for a quiet night cap, bite to eat, and to plan our tactics for the 2 days’ cricket to come.

Saturday dawned, with deep grey skies and a typical Singapore monsoon shower in progress. Noel, keen and eager, got down to the ground at about 8:15 to find pools of water covering the outfields of both Ceylon Sports Club (CSC), and the Indian Association ground, and Spirits President, Amar, pacing up and down with a face like thunder.
A very fragile looking Vaughan followed shortly afterwards, muttered something about getting back to the Fragrance Hotel at 6:32 a.m., and then proceeded to curl up on the pavilion floor and fall fast asleep!
Finally the clouds cleared and we got underway about 10:30, batting first against the Misfits. Vaughan, fresh from his slumbers, clobbered his second ball for 6 over mid-wicket and went on to score 20 odd in a respectable total of about 50. However, with some of the Southerners’ bowlers showing distinct signs of rustiness, the Misfits knocked off the runs with relative ease.
Next up were top seeds in the group and one of the teams fancied for the main trophy, the SCC Players… Speddo, newly arrived after spending a couple of hours tramping the streets of Singapore looking for an elusive taxi, got us off to a flying start rattling the stumps with the first ball of the innings. SCC, however, had plenty in reserve and built a challenging total of 70ish, which proved to be enough, Southerners ending up with around 45.
There followed a long break between games, during which we took full advantage of the bottle of vodka kindly donated by Speddo, and cheap draft beer (by Singapore standards) from the temporary bar strategically located a few yards from the Southerners’ tent.
Memories of the scores in the final two games, against Anza Ales (Singapore) and the City Beach Goats (Australia), are a bit hazy, probably as a result of the aforementioned vodka and beers. Suffice to say we lost both games, the highlights being scores of 20+ for Nick and Mossy, Mossy hitting a powerful 6 almost taking the bowler’s head off… Nick hitting a big 6 into the pavilion, (which he proceeded to describe in intricate detail for the next hour or so to anybody willing to listen!), a big 6 by Neil over square leg, and Speddo, living up to his reputation as the Southerners’ “Legend”, batting once with wicket-keeper’s gloves, and a second time with a helmet only and little else in the way of protective gear!

Saturday evening saw all teams mingling in the CSC pavilion, with entertainment by a local band, the Blackberries, and plenty of cricket stories, banter, and general camaraderie.

And so to Sunday morning, final group game against the Spirits Rascals, with everything to play for; the winner going into the top 16 and the knock out stages of the tournament, the loser suffering the ignominy of finishing 17th or 18th and playing for the wooden spoon.
Southerners batted first, and this time it was Noel’s turn to score a few runs knocking 20 something in a defendable score of about 55. After a tight first over from Neil we looked well on top, and were having visions of silverware later in the day… However a few loose balls saw the Spirits get back into the game, and after a keenly contested, evenly balanced match, Spirits just about got home with 2 balls to spare.

“Every cloud has a silver lining”, and in our case the silver lining was the opportunity to relax on the side-lines with a couple of cold beers and watch the 16 qualifiers slugging it under the hot sun for next few hours. After a few good games, the highlight of which was Kelawar CC from KL beating the fancied SCC Players by one run with a run-out of the last ball, the Misfits Masterbatters (Singapore) and Kelawar emerged as the Shield finalists. 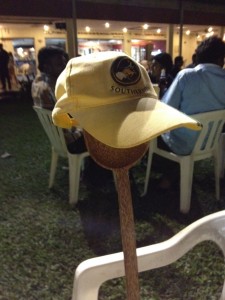 With the schedule slipping backwards, and the organizers worried about playing the Final in the dark, after a few negotiations it was decided that the wooden spoon game, against Topi CC from Indonesia, would be played as a bowl-off, each team member bowling 1 ball at the stumps, with the most ‘hits’ winning the game. Neil was nominated to bowl for both sides, one of the Topi players having already left to catch an early flight… 12 balls later Southerners and Topi had ably demonstrated how they both ended up in the wooden spoon with not one playing hitting the stumps! Somebody suggested we continued on a sudden death basis, but with the organisers nervously looking at the clock, it was finally agreed that the spoon should be shared.

The final was won by Misfits Masterbatters, and after the awards ceremony, we retired to the bar for more banter and camaraderie; Vaughan and Noel upholding the Southerners’ growing reputation as one of the most sociable sides of the competition, being the last to leave, along with Amar the Spirits president, as the shutters came down.

All in all a very enjoyable weekend despite not living up to expectations on the pitch, and looking forward to going back for more next year.