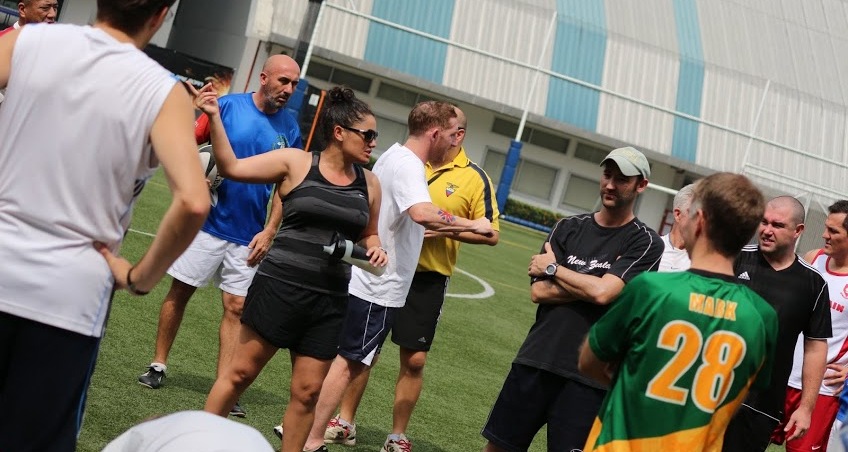 October the 13th was an historic day for the Southerners with the first annual North vs. South Battle of the Hemispheres’ being held at NIST. Although inter-hemisphere competition is nothing new to the club- the rugby section has in the past held their own grudge match- this was the first time each section turned out to battle it out together. Both teams had a great turnout. The touch section was prominent (we did hijack their pitch booking for the event), plenty of netballers were there and even a few of the cricketers came along.  And despite having a big game against the Bangers the next day, quite a few rugby boys came along too. The wet weather stayed away so the scene was set for a thrilling few hours of sport, sledging and later on, cans (or ales, pints or buds, whatever you call beer where you come from).


The men’s and women’s touch matches got started first, the Southern hemisphere taking out both games (men’s 6-3, women’s 2-1). The mixed touch was won by the battling north 6-5. North seemed comfortable throughout the match, at one stage holding a 5-2 lead. South came back strongly however and threatened to snatch a decisive victory but it was too little too late, the final whistle coming in time to keep the north in the competition.

The netballers then headed inside to enjoy the air-conditioned luxury of the gymnasium while the cricketers set up the pitch to cop a bit more vitamin D outside. The blokes weren’t complaining too much however, cricket being much gentler on the heart-rate than netball, and it must be said that several of the girls (our fearless president being one of them) played 50 minutes of touch followed by an hour of netball. It was a truly heroic effort.

Unfortunately the netball was destined to be a dead-rubber (Australian term meaning a meaningless match) because the north has so deeply infiltrated the netball section that the south couldn’t field a full team of southern Sheila’s (Australian for chicks). But as already mentioned the girls still chose to play a match instead of taking the soft option of going outside and watching the cricket. Inspirational.

So as it happened it was left to the cricketers to break the deadlock and in an interesting twist of fate, half the players didn’t know which end of the bat to pick up, it being their first time in whites. Luckily both sets of captains kept to the spirit of the match and made sure all the bunnies (useless batsmen) got a bat and everyone got a bowl, no matter how funny they looked doing it. It actually turns out that experience at cricket doesn’t always help, with a few old-hands dropping catches or giving away their wickets cheaply. Sure the bat flew through the air a few times (you take it with you after you hit you bloody Seppo’s) and some of the deliveries would make even a Sri Lankan umpire consider calling a no ball, but considering the amount of greenhorns (American for inexperienced) there were out there, the standard was pretty good.

The actual score is still a bit of a mystery since the final over got bowled twice so in the end we decided to do the sporting thing and call it a draw. It seemed fitting. This of course means that the first annual Southerners Battle of the Hemisphere’s Challenge Trophy was a draw. How nice.

Pleasingly, we had a great turnout for the prize-giving down at Am Bar at Four Points Sheraton. Thanks must go to our sponsor Four Points Sheraton for providing us with a great drinks deal and for setting up the BBQ just for us. But the biggest thank you goes to all the Southerners who turned up in such good spirits and played each match with a relaxed and positive attitude. We hope to make this event a regular part of the Southerners social calendar so keep working on your chest-passes, leg glances and side-steps and we hope to see you out there again next year!