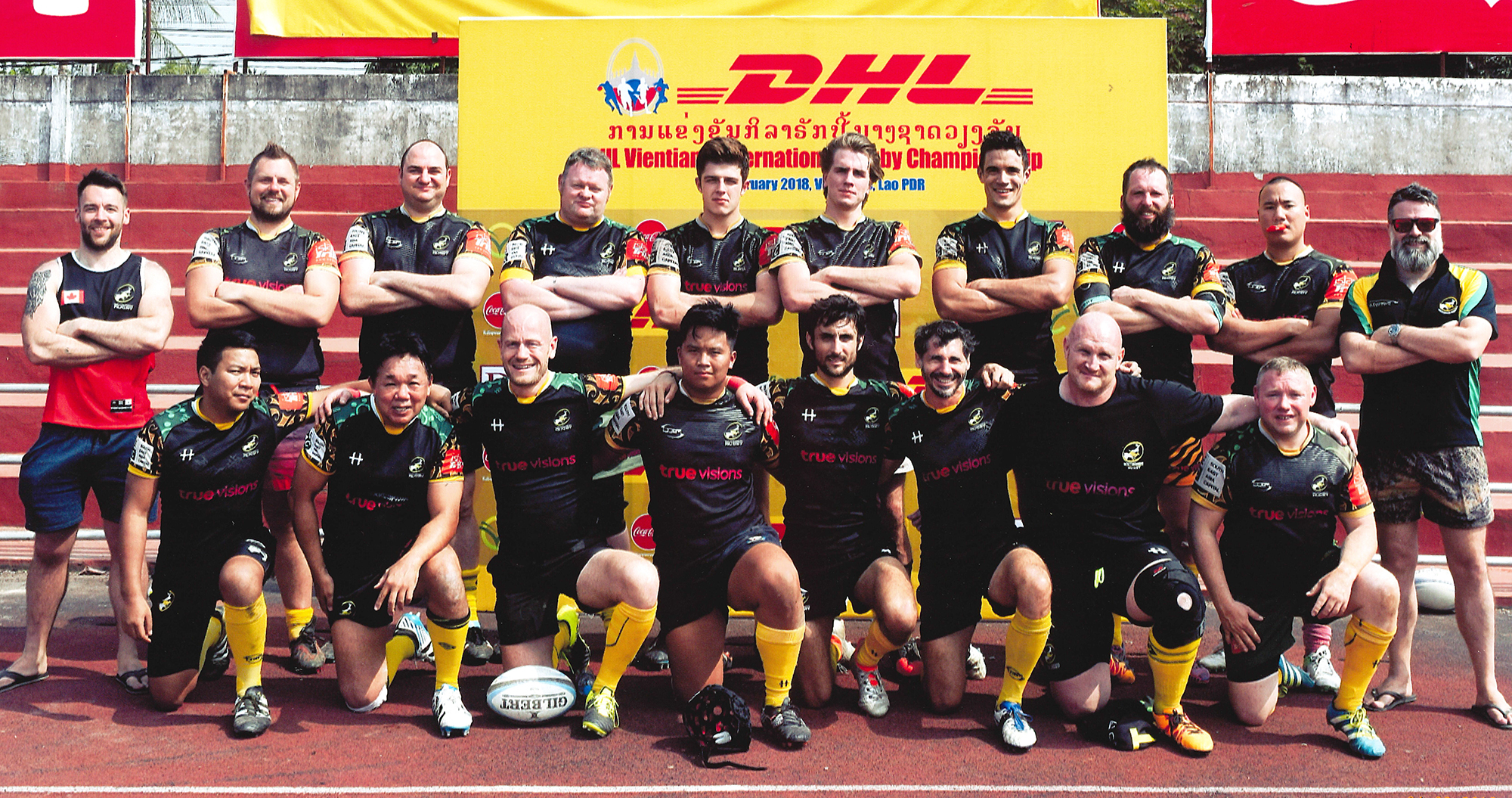 The Southerners kicked off 2018 with a return to their old stomping ground of Vientiane, Laos. Hoping to repeat recent successes a small squad which represented the Southerners both young and old descended upon sleepy Vientiane in search of silverware, and Laotian libations. Our squad ranged from a number of young and eager first time tourists to more seasoned veterans, but truly represented the inclusive spirit of the club. A special mention to three out of town tourists Ferret, Anthony and Joe who travelled many miles in search of rice based beer. 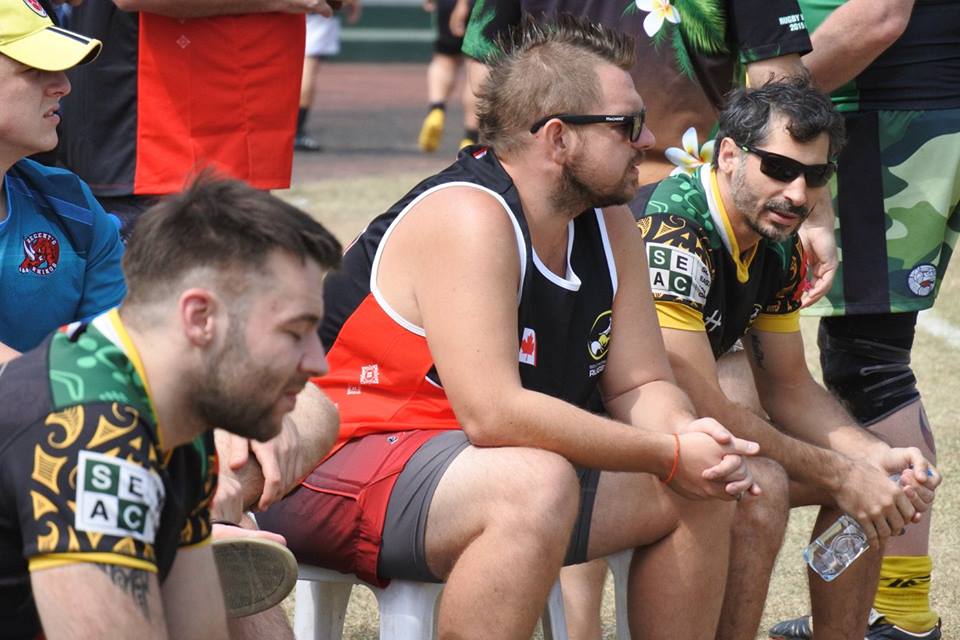 Our arrival was made more interesting as our non-resident but regular America tourist Joe sent us on a magical mystery tour around Vientiane as our hotel decided to move us to a secret location fortunately closer to the stadium. Careful planning and hydration was undertaken at a rooftop site and thanks to Darrell and his excellent planning, we avoided the traditional Southerners curse of an early start on the Saturday waiting for players. Our first game was against the Vientiane Wild Hogs and our lack of game time showed as we made heavy weather of a victory against a fit, mainly local based side. 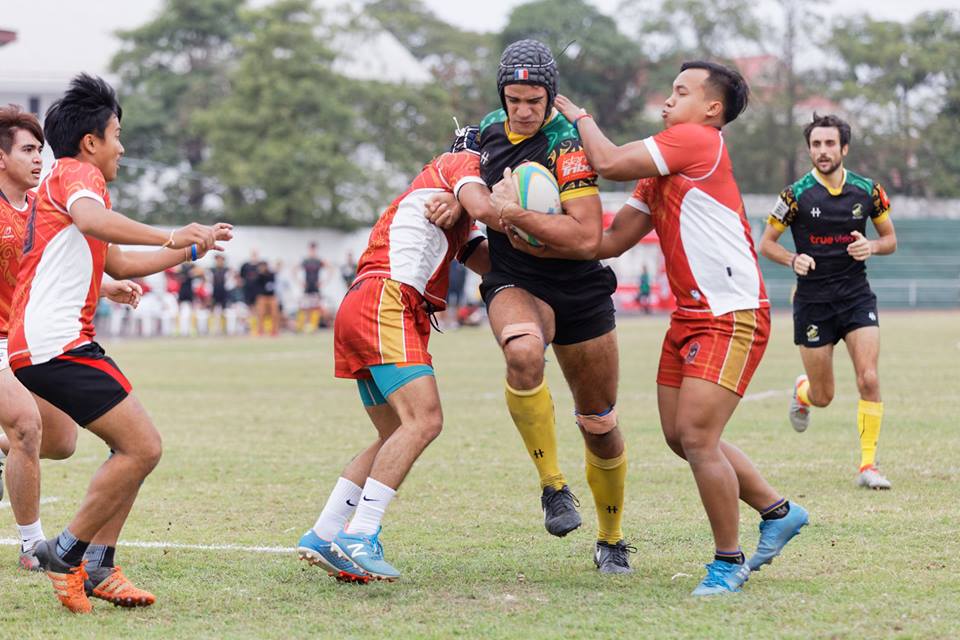 Far more challenging were the Royal Thai Police who had travelled in numbers and were very well drilled. They were as ever strong and quick and made extensive use of the space to score a convincing win. Our final and most important game was against the Mahasarakham University Big Crabs. This team from North East Thailand had a number of quick players. Fortunately the Southerners were able to regroup from earlier disappointment and finish the day on a high ready for a Cup semi final against the DAC Rejectors one of the sponsored teams that included players from Hong Kong, New Zealand, Samoa and Ireland. 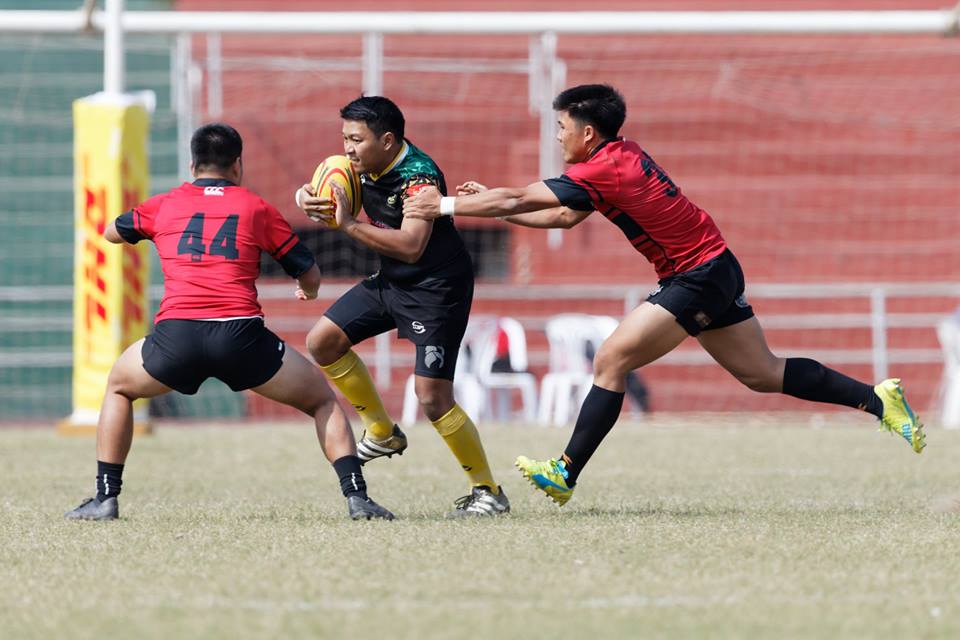 In true Southerners style, we prepared for the challenge with athletic supplements and early night and a ration of Malibu, purely for the nutrients of course. Our younger players from Australia Tuss and Patrick from the windy city of Chicago made sure other team members were hydrated. They were of course provided with appropriate clothing to protect themselves in the event of spillage. This short strategy session included a careful watching of the 6 nations where our Welsh contingent were in good voice and our sole Scot suffered some good natured ribbing from Hywel in typical Welsh understated style perhaps making up for his unfortunate injury which left him unavailable for Sunday. 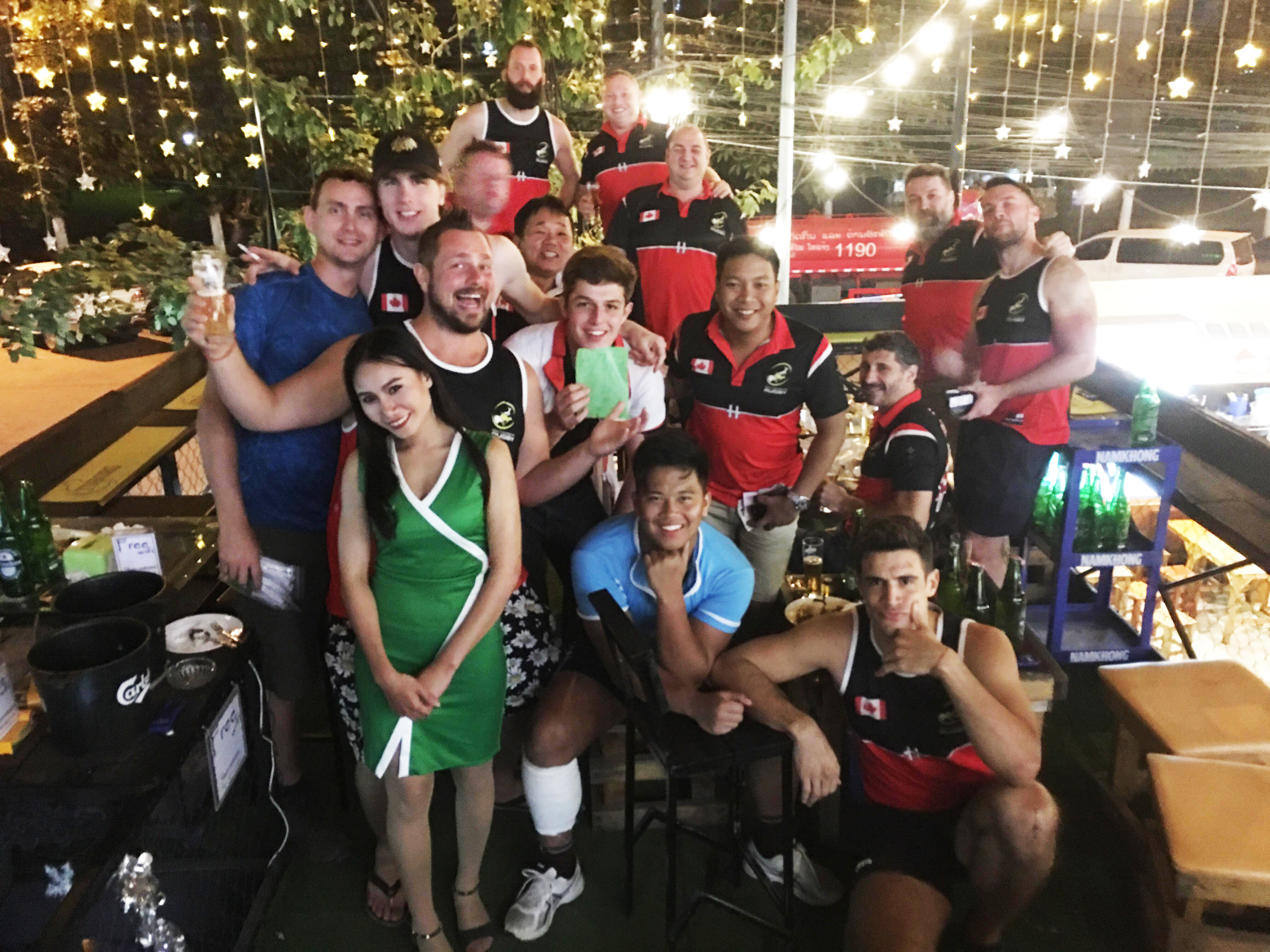 After an early night and appropriate athletic preparation supervised by Ferret, who as ever set a great example on and off the field and like our other long distance tourists made the extra effort. We were well prepared and fully expected to face all three former internationals the next day. Frank Bunce and Junior Parrimore were however absent on Sunday morning perhaps frightened by our performance on Saturday. Paddy John made the field and Luc managed to kick every ball in his direction. We managed a very strong performance and tries by Xav and Joe helped us into a semi final against the very strong DAC Weredragons largely formed from players from the Hong Kong leagues. We faced this side with only 5 recognisable backs including a number of Frenchmen, and a number of players out of position. Much credit to the flexibility and spirit shown. 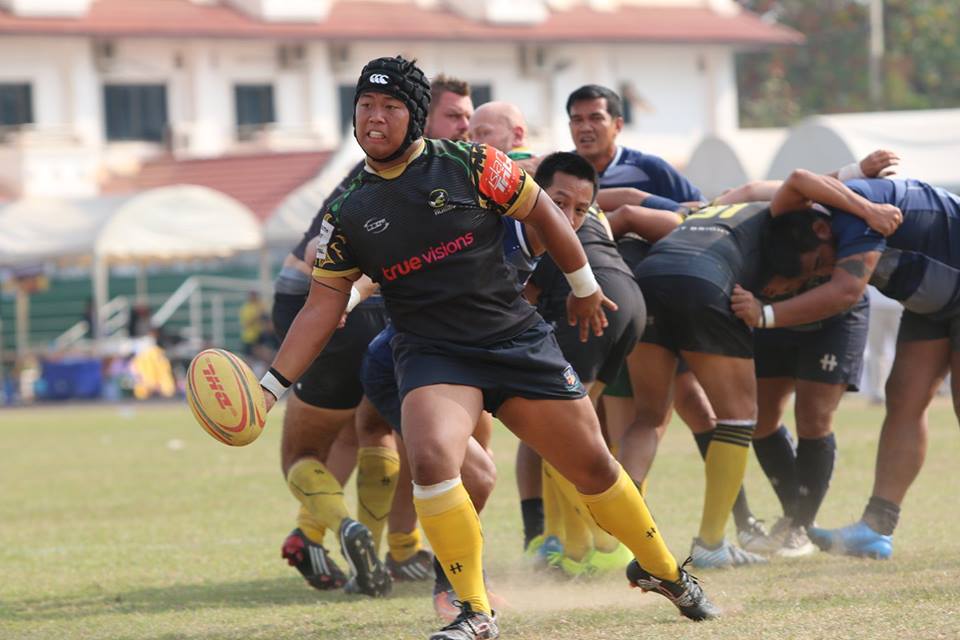 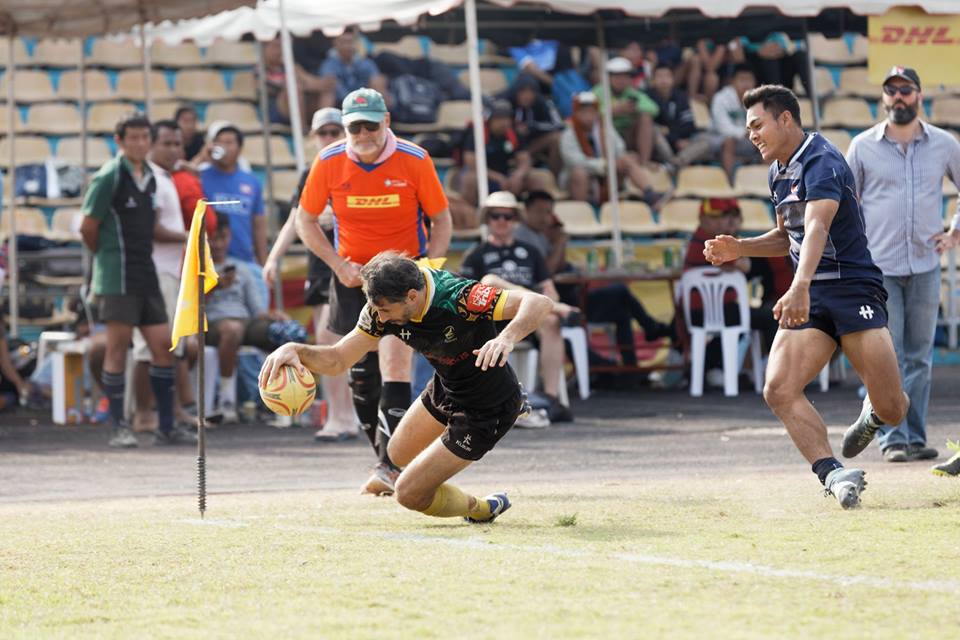 Despite a valiant effort we were unable to replicate our earlier form and found ourselves in a plate final against a strong Thai Navy side going down 3 tries to 1. As ever they had pace aplenty with a number of representative players and our weekend ended with us placing 4th overall, which given the eclectic nature of the side represented a good showing and a good warm up for the Bangkok Tens.

Laos hospitality was excellent and all in all a great tour which should be experienced by all Southerners at some point was had. Whilst our quest for silverware may have failed, it was made up for with a great weekend away for all concerned true to the spirit of Southerners rugby.