Day 1: Our first match was against the KL Tigers and we were both excited and nervous in equal measure. This was to be our first match with a new look squad and the first ever match for some of our team. We had practiced A LOT, but we all knew matches were a completely different ball game. We were keen to get kick off and get that first win under our belts to set the tone for the tournament. Having made friends with the Tigers at a prior tournament, we knew they had an pacey winger and a front row that would be tough to beat. But we kept to our game plan, remembered all those late night training tips and managed to break through to score a try in the early minutes of the game. A tough second half saw KL score to draw level but thanks to quick hands, good teamwork and the speed of our newest recruit, Sherienne. We soon pulled ahead again and with a successful conversion by returning Southerner, Emma. The Southerners women were up 12-5 ahead. Our tough defensive line ensured that it stayed that way. First match down and first win in the bag! Final score 12-5. 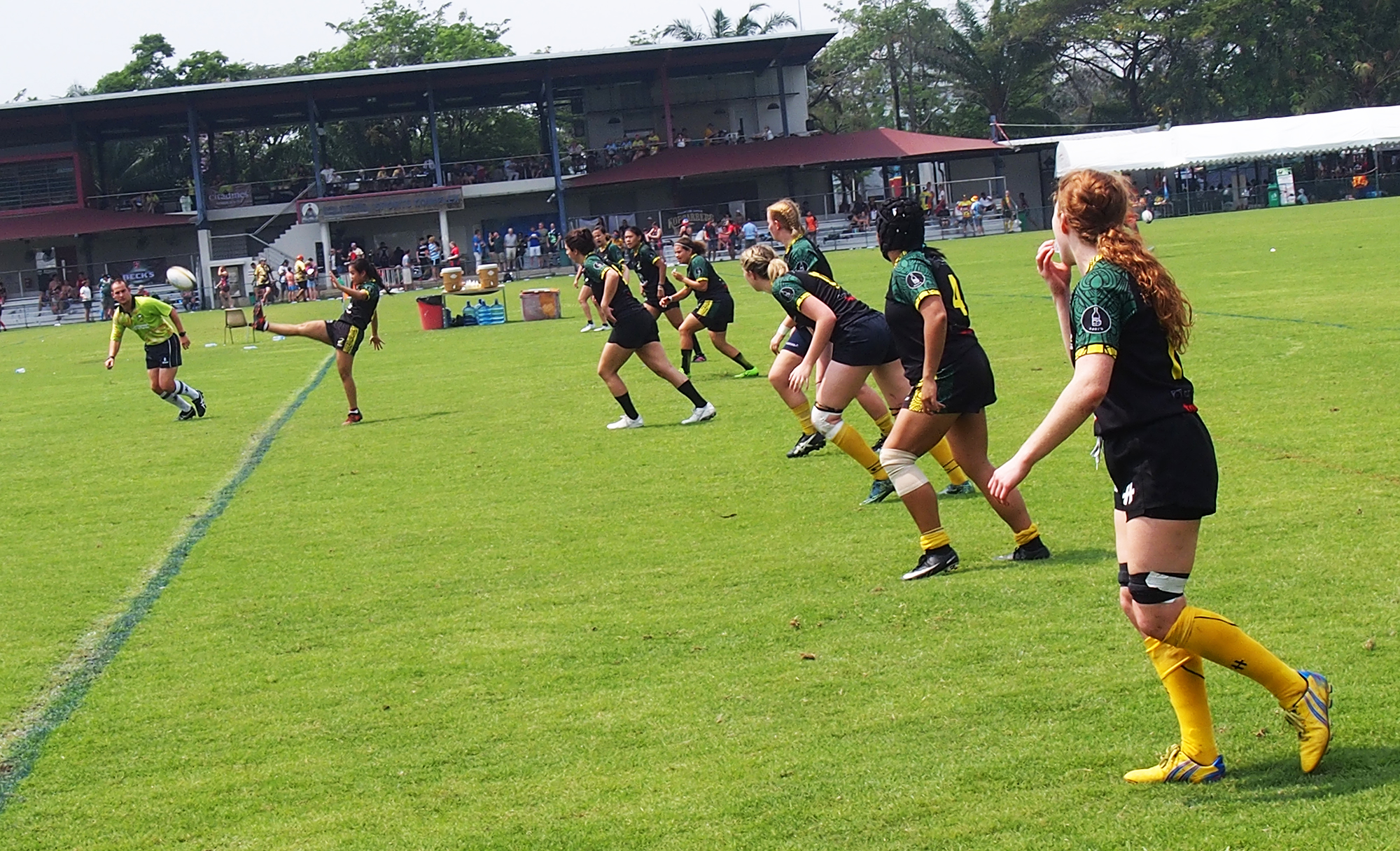 After a short break we were back on pitch for our next draw, which against last minute entrants the BIT Barbarians. The match kicked off and we Southerners started well, quickly going ahead by 2 tries. We had been working our set piece and it showed with in our solid and controlled line-outs, our powerful front row made light work of the scrums to secure our ball and also to steal a couple of the oppositions. Chantel in her new position at fly half controlled the flow of the match and fast hands to our speedy backs meant we got a few more tries in the second half. A conversion on one of the tries meant we finished our second match with another win. Final score 27-0. 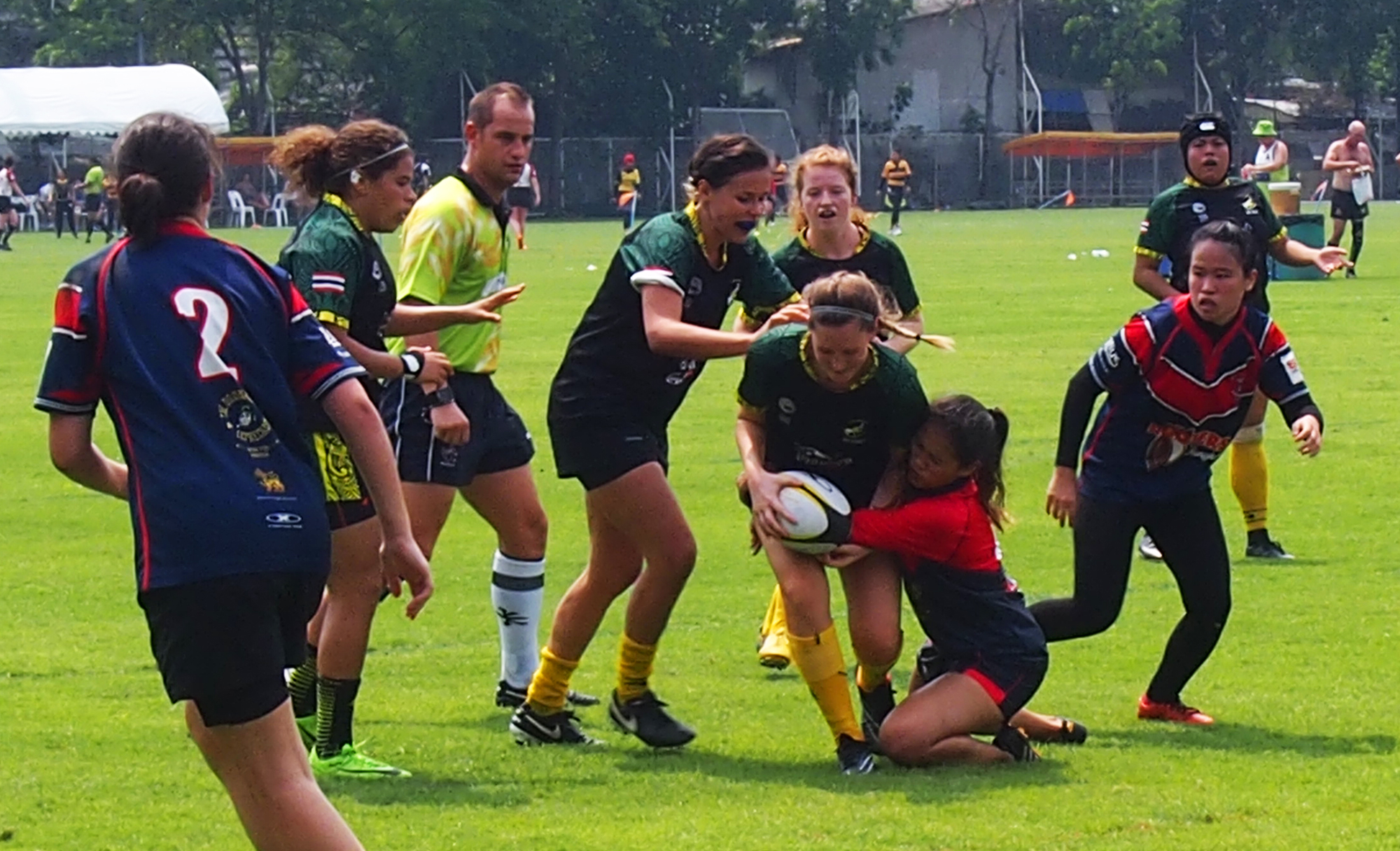 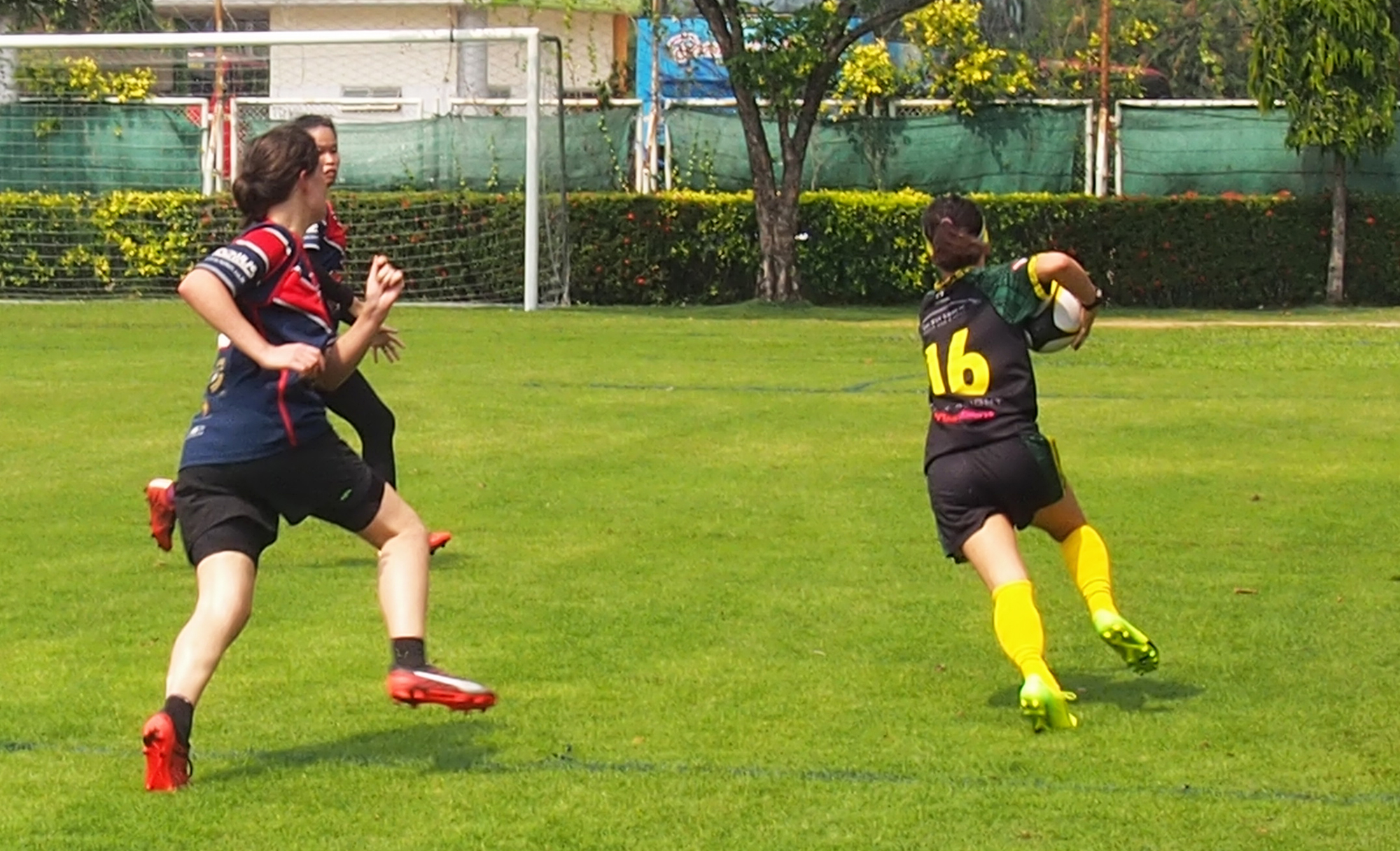 We were elated! We were 2 for 2 but we knew that our third match was going to be our toughest. The Vientiane Lions are a very quick team, mostly comprising of Laos national players who were well drilled. It was to be a battle of rugby styles, we had size and strength while they had speed to burn. One thing for sure, this game was not going to be clear cut. Vientiane were great at drawing in the defense, keeping the ball alive and attacking the spaces out wide. They pushed us back again and again and we held them out with some great tackling but they broke through to score a try and converted for the first points of the game. 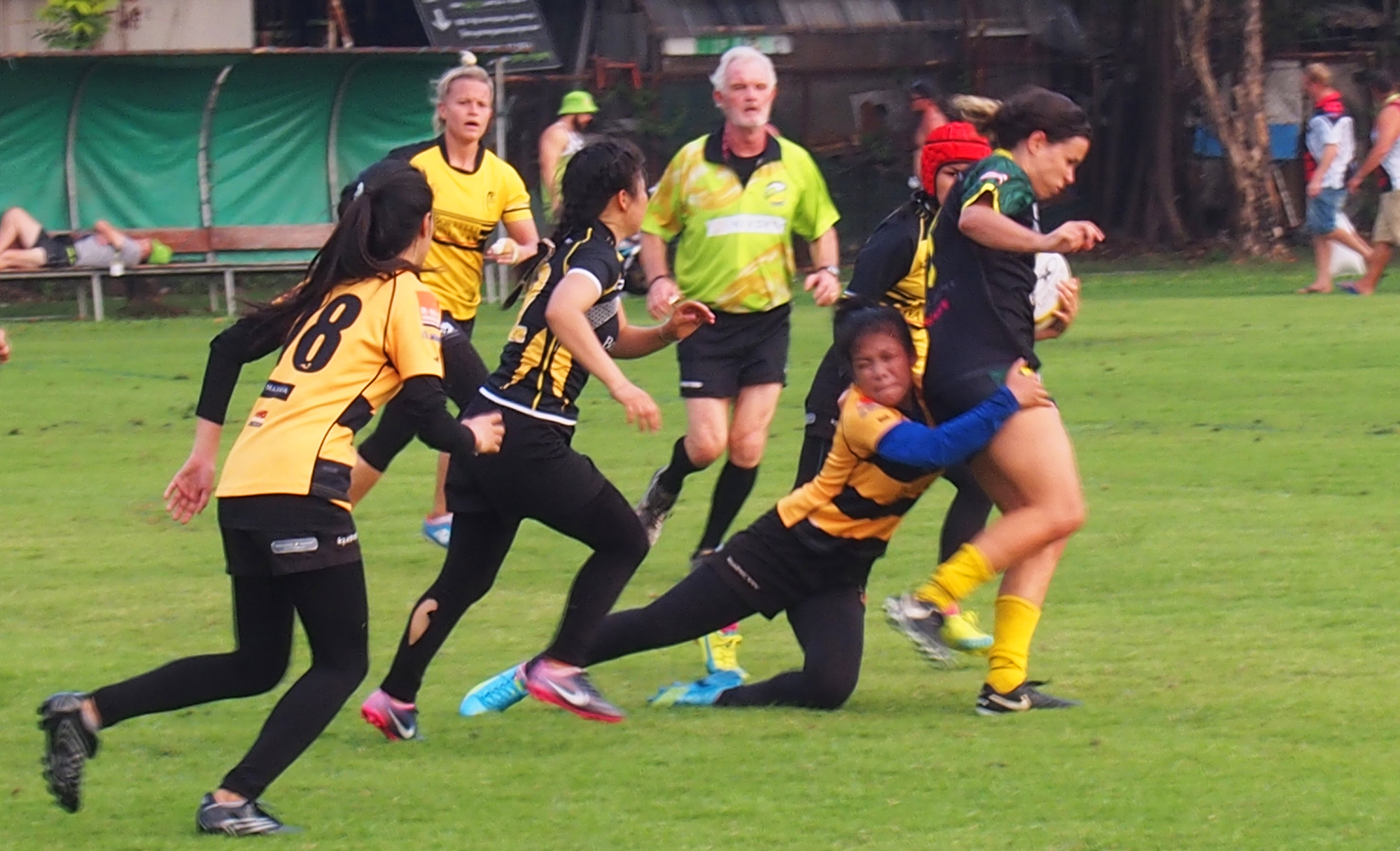 We used our size and strong direct runners to our advantage, bursting through the middle and pushing back their defense, but it was not meant to be as Chantel was held up over the try line ending the first half 0 – 7 to the Lions. In the second half, we were tired, not getting to the breakdown quickly enough and losing possession too easily, but a quick interception and fast footwork from Sherienne saw her sprint all the way to the try line to make it a try a piece. Unfortunately a lost ball in the ruck saw the Lions score and convert again. The Southerners Women’s rugby team ended Day 1 with 2 wins out of 3. Final score 5-14

Day 2: After a festive night, little less rest than required and sore bodies – we were back on pitch and reluctantly ready to ruck on! First up was the Saigon Gecko Ladies who were low on numbers but not on skill or enthusiasm. Their powerhouse forward Heather was on form – getting hit felt like getting run over but we plenty left in the tank for day 2. Kait and Kayla had some strong carries which set the platform for the tries to come thick and fast with Sherienne scoring 4, with two of which were converted. A lapse in defense allowed the Saigon team to sneak past the try line. However, the Southerners had one final run in them, going on to score one more before the final whistle. Final score 29-5.

Our final pool match of the tournament was the long awaited derby game against the Bangkok Banger Belles. A match that we always look forward to. The Belles were tough, they were quick and powerful at the breakdown and we were knocked off the ball a few more times than we would have liked. This enabled them to get the ball out wide and get over the line. Their fast start caught us unprepared and put us on the back foot as we conceded another try and conversion before half time. A change to the line up and a tough team talk from our coaches saw us come out for the second half all guns blazing. But early in the second half  we lost Katie to concussion, copping a nasty knee in the head. Unfortunately, we were unable to break through their defense and didn’t get a foothold in in the game. We showed plenty of heart and effort on the pitch, but confusion during a ruck resulted in a turnover and enabled the Belles to score another try which was converted. Final score 0-19. 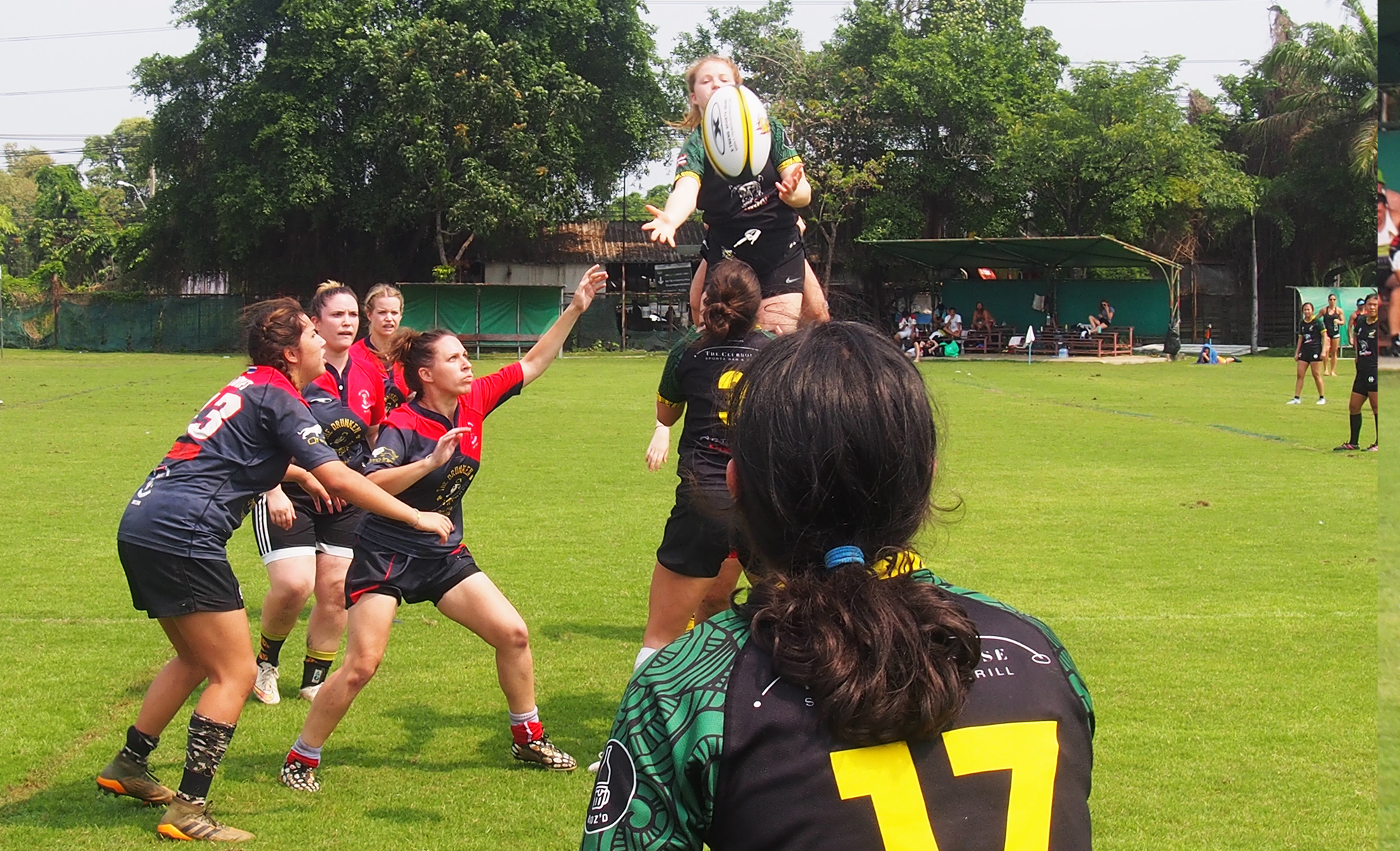 With all pools matches done and dusted, the points were tallied and we were heading to the Plate Final. After a very long morning and early afternoon of the second day of the tournament, the Southerners women were ready for our last and final match against the KL Tigers. We had beaten them by a try on the first day, so were confident but a bit anxious as well heading into the game. 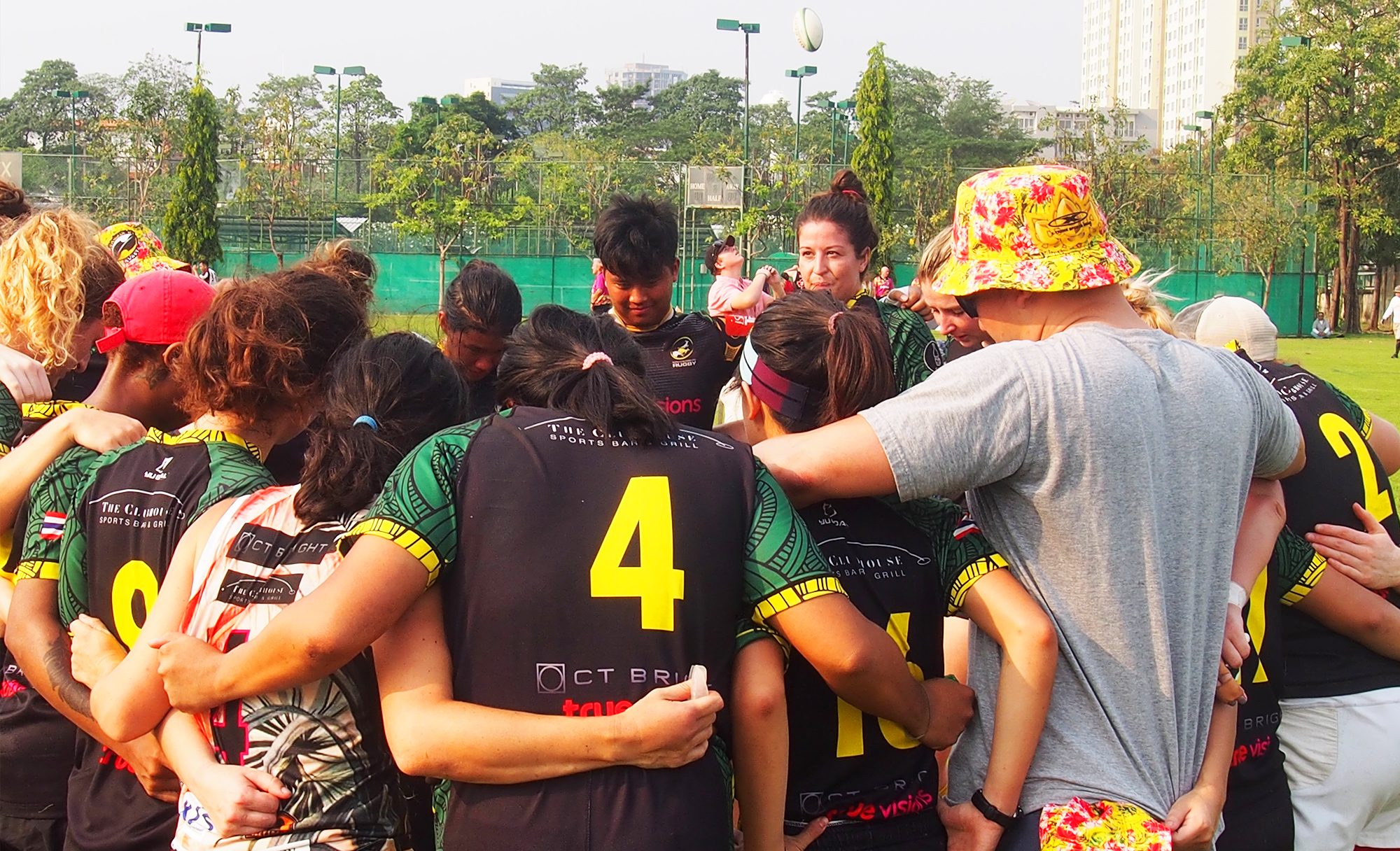 We knew it was going to be a tough match as KL had a very fast winger and a strong defence. The match started in the worse possible way and before we knew it, KL Tigers were up by three tries and a conversion (17). Two of those tries were scored by their super speedy winger which Bangkok Val was not nearly fast enough to catch and missed the tackles completely (yes, twice). Sherienne, our powerhouse centre and MVP of the tournament, managed to pull one back before halftime with the conversion by Emma successfully going over. This set the stage for what was about to be the most exciting match in Southerners Women Rugby’s history. Halftime 7 – 17.

The KL Tigers defence was also solid in the second half, but Southerners had a secret weapon they didn’t know about (or us for that matter): Chantel’s kicking. Spotting there was a big gap behind their defensive line and knowing that Sherienne would be able to get there with her pace, Chantel kicked ahead and shouted ‘GO! Sherienne, GO!!!’ and girl did she go! Sprinting ahead, kicking the ball forward, picking it up and scoring a beautiful try (14 – 17). The KL Tigers – and to be fair – most of Southerners women, were baffled at what just happened but we celebrated anyway! Luckily the conversion was good, so we knew that we needed one more try to win the match! 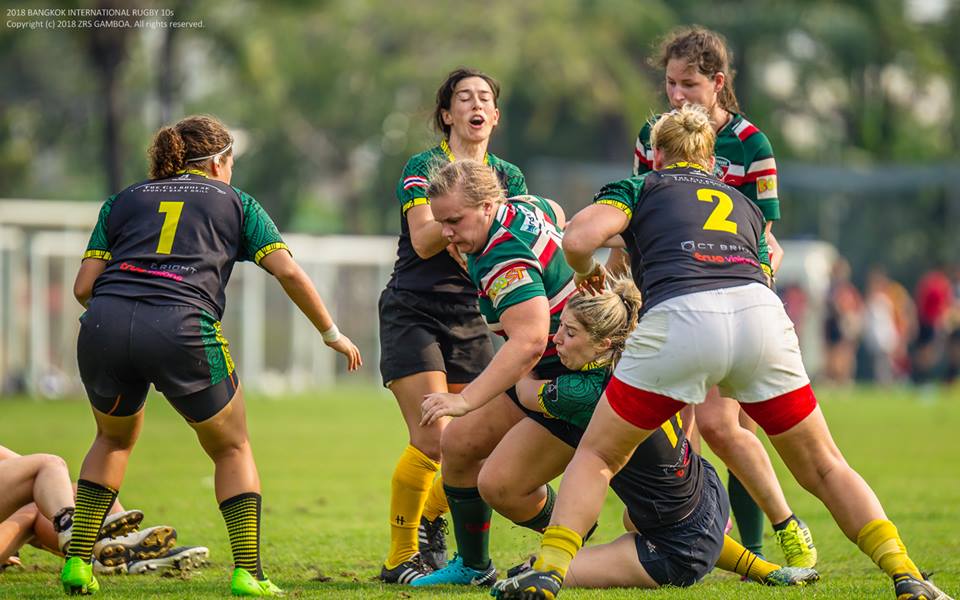 The clock was ticking and time was running out, our powerhouse forwards kept the ball moving up the pitch and once the gaps opened up, we passed it wide to our backline. Sherienne once again, proved that nothing was going to hold her back from scoring and she did it again this time, dotting down in the far right corner of the pitch (19 – 17). Before we knew it, the whistle went and it was all over. Southerners had won by 2 points! Yes, we got to take home silverware and we’re now the women’s contact PLATE WINNERS of Bangkok Ten’s International Rugby Tournament 2018!! 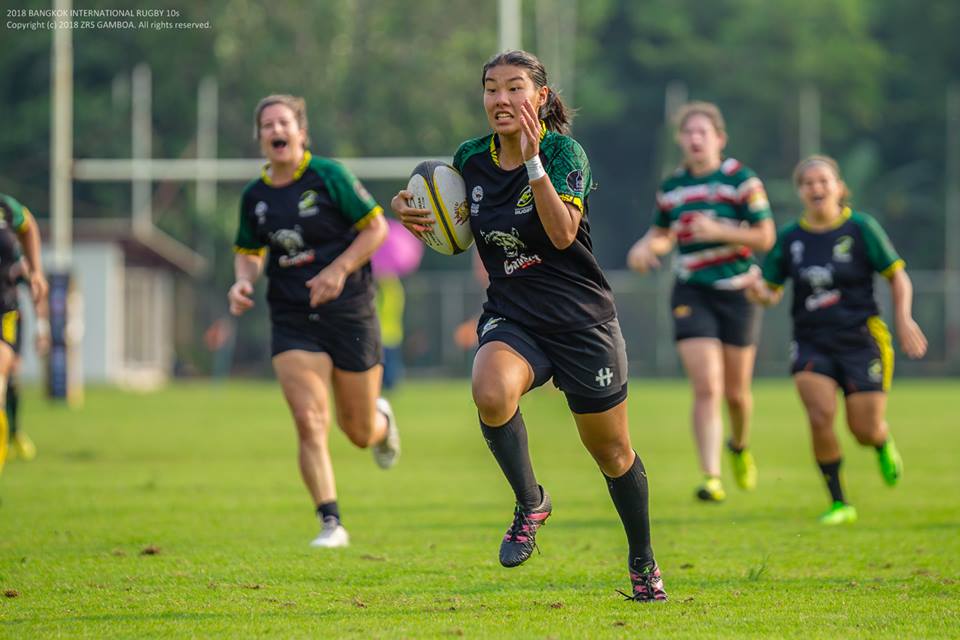 Congratulations to the entire team for their efforts including everyone who put on the jersey for first time! Well done to our try scorers; Sherienne, Chantel, Val and One. Thanks to our Captains Moira and Val for their efforts both on and off the field and a big thank you to our coaching team; Stefan, El, Knotie and Tuss for giving up their time to train us. A final thank you to all of the Southerners family who came out to cheer us on from the sidelines.