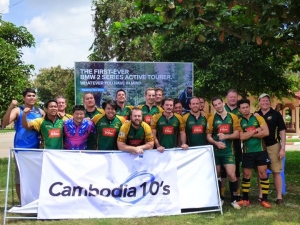 October brought around again the joy that is the Cambodia 10s tournament. The Southerners were the defending champions this year, so expectations were high that the boys going to the tournament bring back something to add to the growing shelf of silverware.

Most of the team were able to get the Friday night flight, except for the one player who never made the flight due to him attempting to slice his own arm off. Add to that the inevitable delays, thanks to flight times, traffic, and people turning up with the wrong passport, the bulk of the team got there safely on Friday. The rest of team, having actual proper jobs, caught up on Saturday morning. Thanks to some quick elbow work and mauling by these boys on the plane, they were soon at the front of the queue and at the ground in good time. The whole team was now pumped and ready to go before the start of the first game.

The first game against INSEAD proved that the boys were a little rusty, but, despite this and the unfortunate weekend-ending injuries suffered by two of the team, the boys were able to work together to overcome the opposition through good quick balls and some impressive offloads in the tackle. Even with the heat and the sun beating down on the teams, the Southerners were able to put together several good moves and clean breaks that helped them to win the game convincingly.
The second game was a sterner test with the boys up against the French Asian Barbarians, a wily team who not only played well but also had a familiar French prop playing for them. They started well, using their bulk against the Southerners early, but the boys did not panic, soaking up the pressure before forcing a mistake which allowed our own French boy, Dom, to break through the line. This game of attrition continued, with the Southerners coming together to play some smart rugby, with lock Matt busting through several tackles, before then offloading to prop George, putting him clear for a 50 metre solo run, only to get tackled within thrusting distance of the line. Lead again by the team’s top try scorer Kenta, (no, really) we were able to give the French team their first taste of defeat.

The final game of the day came against the Hanoi Dragons, who decided to break with convention and showed up not only sober, but also with a decent back line. The Southerners team at this point was comprised mostly of forwards and they played hard, fighting for every ruck and contesting everything, with even hooker Charlie getting involved and hitting his jumper for the first time that day. However, in the end they could not match the tempo of the game in the heat, and the Dragons ended up defeating our boys.

At this, the day was over, injuries were counted and beers were consumed. The team made their way back to the hotel, ready for the evening’s festivities. In preparation for this, some boys decided to nap, others invested their money in the local economy, and others went for pizza, which seemed to be happy enough for all involved. Just before heading out to fraternise with the enemy, the boys of course followed up with the age old tradition of a few quiet beverages in the pool, with humourous anecdotes thrown in for good measure. With that, it was off to the nightlife of Cambodia to enjoy the World Cup Final, even if some of the boys were not feeling as happy as before.

With the dawn light of the next day coming through the windows, the team managed to crawl their way down to breakfast, looking like Death incarnate. Stories were swapped, painkillers were taken, and despite all their better judgment at this time, they agreed to go to the pitch to play more rugby. The only saving grace at this point being that kick off was at a decent time, as opposed to the poor souls who had the 9am start. As they approached the pitch, someone finally woke up enough to notice the team’s Cambodian mascot Marty was nowhere to be seen, and after the previous night’s activities, presumed dead.

The first match for the Southerners was against local favorites SAHOCA, who also doubled up as the Malaysian national team, with a few Fijians for good measure. The first half was a battle, with the Southerners mostly hungover forward team keeping the ball in close, and rumbling their way forward. Several good set moves and solid defence from the backs meant that half time, the score was only 7-7. The second half started well for both sides, but as the game wore on the back line of SAHOCA proved to be the deciding factor, as they ran in 2 more tries to win the game. Southerners were down, but not out, now being placed into the semi-final of the draw for the plate, and with silverware still to play for.

The next game brought the Southerners against the Saigon Geckos. At this point, Marty was still nowhere to be found, all of the team were carrying injuries, and heat was still sapping away at energy levels. But even with this, the boys went onto the field ready to play, and play they did,. They Geckos came out faster, hitting the boys in green hard, but the wall did not break, with the forwards providing a platform for the backs. Once again, as had happened in so many games, Kevin was given the ball in space down the wing, only for last minute defending to pull him down. Captain Sod kept looking around and nipping away at the rucks and scrums, looking for that hole to put someone through, but as the game went on, he eventually succumbed to the game with a tournament ending ankle injury.

With so many injuries, the Southerners were playing out of position, and with no viable subs, and the Geckos took advantage of that, running in some quick tries. But heads did not go down, and the boys still fought all the way, smashing through the middle, hitting every tackle, and running fantastic angles to let the Geckos know that nothing is taken from the Southerners with ease. Our French centre Remy got the ball on his own half, and was able to blitz through six of the opposition, leaving them all trailing in his wake, before placing the ball between the posts.
However, with the Southerners gasping for air, bodies aching and still going forward, the final whistle came, and with it the end of the tournament for the boys. They had lost in the semi-final. Every person came off that pitch spent, knowing they had lefty everything out on the pitch to try and salvage the game, but to no avail. This year it seems, the Cambodia 10s would be a tournament without silverware for the boys in green. They played hard rugby, they played smart rugby, and towards the end they gave it everything they could, with people falling away left right and centre; and not one person ever gave up the game, playing until the final whistle, always chasing that next score. They may have lost, but they can hold their heads up high, and say with no remorse, that they put everything on the line when it mattered. 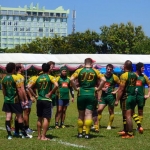 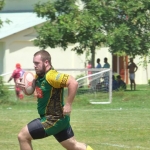 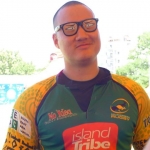 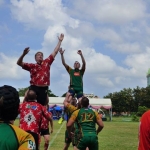 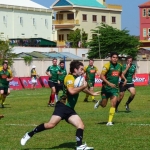 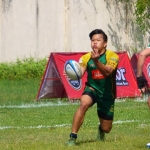 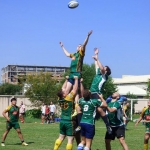 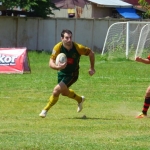 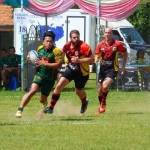