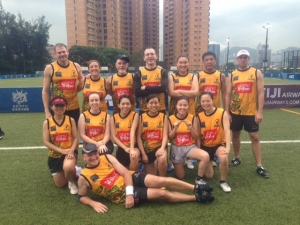 Alas fellow tourists, hope you’ve all arrived back home and are recovering well from a great tour.
A brief account of the day per below, I take full responsibility for the accuracy of the report and will accept any fines issued…
We were fortunate enough to have support from non-Southerner’s, so much so that we actually registered a full squad.. and sneak in a 15th player. In theory, having a full compliment would give us a good chance to win a game, but in practice it enabled us to have some energy left for the after party, which was well used. Kitah’s parachuting arrival from the airport added a warrior’s strength to our defensive game, and Doug’s surprise addition gave us the hidden edge to our attack. Captain Raphael was fully fuelled from the night before and took advantage of the ample cushions at the ground to have a pre-tournament snooze (and a beer at 10am to re-fuel).
Points to note: we did achieve our goals:
1). Scored some touchdowns.
2). No injuries (assuming Jim’s ankle and Kitah’s knee is OK ?!, hangovers excluded).
3). Will be remembered for off-the-field activities.
The first game against Thunder started quite well. It soon became apparent that our free-flowing style of match play was not suited to our opposition, so much so that a flurry of Thunder touchdowns followed. Even though the weather conditions were favourable for the tourists (ie. not Bangkok heat of 40 degrees), Thunder appeared well drilled and had trained together maybe one session longer than us. Our speedsters in the form of Dark Horses Chris and Doug did save a lot of touchdowns, and Raphael had them (and sometimes us) baffled with his unique manouvres, but we still gave Thunder a good run.
Southerner’s: 0.
Thunder: more than zero.
Game 2 vs. HKIEd produced some sparks in the form of a touchdown by Iris and some great handling skills by Kelly and Sarah. The lads tightened up in defense from the first game to hold HKIEd to a much lower score than game 1. Jim’s one-hander super passes had the opposition guessing but were not quite enough to keep them at bay. Some liquid bribes were offered to the ref’s but to no result.
Southerner’s: 1.
HKIEd: slightly above 1.
The third game was against Raven which also produced some exciting passages of play culminating in another touchdown, this time by Candy. The sun had come out of hiding which suited the Bangkok playing style, only catch was that our new team mates were not 8 feet tall to catch the high balls passed to the wings. Raven played well to hold us to 1 touchdown, and our defense held well to prevent a runaway result thanks to courageous efforts by Sarah and Kelly. Even with Kitah’s courage in soldiering on after a knock to the head, we were just pipped at the post.
Southerner’s: 1.
Raven: not too much above 1.
Our last pool match was the decider to progress into the Cup playoffs. Cloud cover had returned… Taipei looked more tired than us… Southerner’s were pumped for action… suspense dripping from the air.
And the stakes were high for the lads to score more touchdowns than the ladies !
The game see-saw’d from one end of the field to the other. With a burst of energy, Doug scores 3 quick touchdowns to get very close to Taipei’s score, and overpass the ladies tally. With a couple of breaks by Captain Raph we edge ever so close to the elusive score-line, only to be beaten by the hooter.
However, our offer of liquid bribes to the ref’s appeared to have paid off, a Taipei touchdown was accidentally put on to our scorecard, we thought we were winners… but we made the correction to honourably miss out by a little bit.
Southerner’s: 3.
Taipei: 4.
(we did deliver fines to Taipei later on !!)
With the bar in sight, we sauntered down to pitch 3 (the “Pit”) for the Bowl playoff against a formidable opposition in Seahwks from Shenzen. The cooling heavens opened up which didn’t affect our ball handling. A couple of early touchdowns by the Seahawks fired us up to return the folly in the form of Raphael scoring his maiden touchdown for the tournament. This also inspired some more sliding (by Raph) in defense and some Chariots of Fire running by Chris and Doug, not to mention all of the ladies’ hard work in gaining ground in the middle.
After half time it appeared that the previous night, and the long day, was taking it’s toll on some of us and the Seahawks scored again.  But the turning point was watching Chris’ wife Jen endure the testing monsoon-like conditions as a spectator, which inspired us all for the final rally to the score line. Jim put his injured ankle aside in true Southerner’s style and jump into the foray.  Kitah’s knee held up well to repeat some Chariots of Fire running, but just as soon as the rain eased, the hooter went. Eyes were then firmly set on the bar.
Southerner’s: 1.
Seahawks: not too much  more than 1.
A tremendous effort by all, thanks again to Chris (and Jen), Doug, Iris, Candy, Leung, and the rest of the Hong Kong crew to help us form the complete team.
Tournament photos will be available soon at “Hong Kong Touch Association” and “Takumi Photography” facebook page.
Until the next tour, let’s keep in Touch !
Cheers – Anthony. 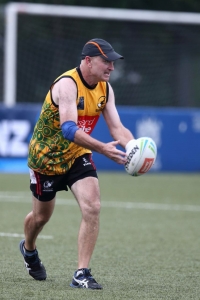 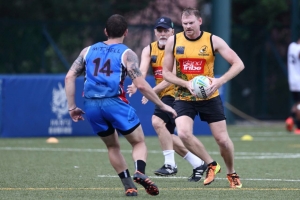 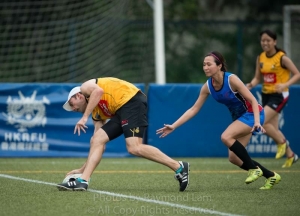 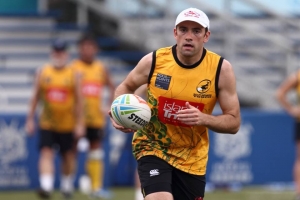 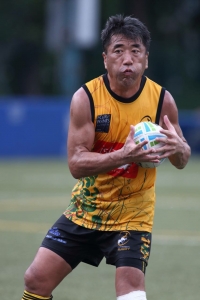 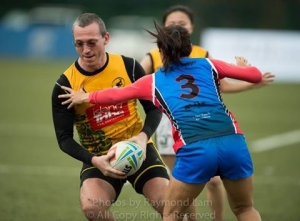 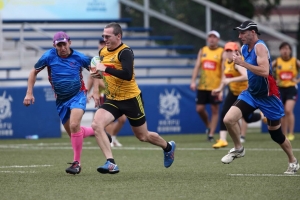